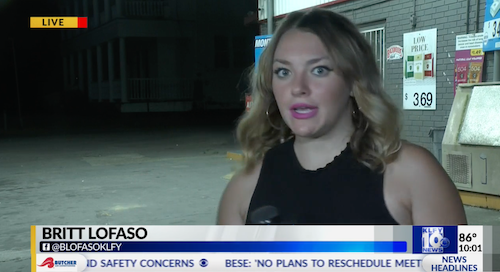 KLFY reporter Britt Lofaso was reporting live on the scene live about gun violence when the sound of two gunshots interrupted her report.

The Lafayette, La. CBS affiliate was reporting on three shootings in St. Martinville, La. in the month of August, which have resulted in the deaths of two people and injuries to a third.

Right after Lofaso’s toss to her story from the studio, you can hear what sounds like two muffled gunshots in the background.

“I actually just heard some gunshots just behind me,” Lofaso said seconds into her live report, which was interrupted briefly when she spun around to look in the direction of the sound.

“It sounded like it came a couple of blocks…I’m sorry, that completely distracted me,” she said, before continuing with her report.

Watch the video below: