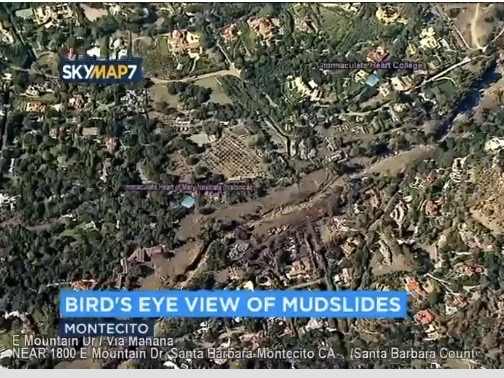 Los Angeles stations have dedicated extra resources across both broadcast and digital platforms to the historic Montecito mudslides.

KCBS-KCAL, the CBS duopoly, produced 21 live reports in a single day exclusively for Facebook Live. They featured station anchors, reporters, meteorologists and helicopter feeds. The station’s live reports, including the one below during the 8a.m. hour on Tuesday, have more than 700,000 views combined.

KTTV, the Fox affiliate in Los Angeles, has also dedicated extensive resources to covering the event. The station posted a viewer video on its main Facebook page of the mud streaming down their stream before taking cover. It has received more than 200,000 views.

KABC extended its morning news during the event and provided additional hours of streaming coverage online. The station’s helicopter, Air7HD, has been key to coverage the station’s vice president of news, Rob Elmore.

“The station’s helicopter, Air7HD, has been an especially vital tool in showing the scope of the devastation. Air7HD is equipped with a state-of –the-art augmented reality mapping system, called “SkyMap7” that allows the station’s airborne reporters to show before and after images of the devastation in real time that make the scope of this disaster even more evident.”

KTLA, the Tribune owned CW affiliate, covered the mudslides in normally scheduled newscasts and across digital with a link to full coverage on the station’s website.

On the main station Facebook page, the station streamed 50 minutes of live helicopter footage from the areas affected in Montecito.

KNBC expanded its coverage by using its Investigative Team to work on stories that explained the warnings emergency officials previously disseminated.

The station also posted dozens of videos on Facebook and streamed directly from both NBC4 Choppers in real-time to show viewers what was happening in and around the Montecito communities.