NEXT:WPVI Reporter And Her Longtime Videographer Retire Together
PREVIOUS:Twin Cities Reporter Loses Part Of Her Leg In Freak Boating Accident 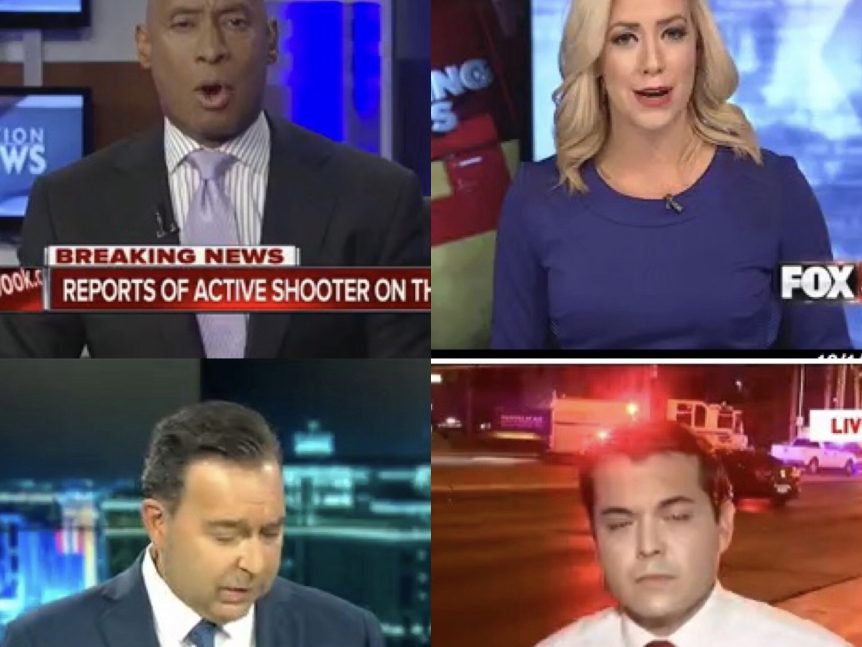 Las Vegas affiliates have been wall to wall since news of the shooting on the Las Vegas strip broke around 10:30 p.m. pacific time Sunday night.

A quick check at TVEyes revealed KVVU was the first station to go live with breaking news. The Fox affiliate was in the middle of its 10 p.m. newscast.

Weekend anchor, Faith Tanner, was solo anchoring the show when they rolled the breaking news banner. She tossed to a live shot from the Las Vegas strip, near Mandalay Bay where the shooting occurred. She was eventually joined on the desk by weekend meteorologist-weekday reporter, Les Krifaton, who monitored the social media feeds while they waited for confirmation on details from police. The station stayed with the story throughout the night.

Gerald Ramalho was solo anchoring KSNV’s 11 p.m. newscast. They broke in early and immediately tossed to reporter Nathan O’Neal, who was live from the strip where concertgoers were waiting for transportation to get out of the area. Ramalho provided viewers with breaking information from his own police sources as well, “my sources tell me that there were so many victims that officers were in fact transporting them in their own patrol cars.”

KLAS weekend anchor, John Langeler, started the 11 .p.m with breaking news and tossed to a live interview from two eyewitnesses. They told the reporter, “We heard about eight shots and thought they were fireworks, it was close to Mandalay Bay. The next set of shots, they took the talent off the stage and police told everyone to get down. We heard over 100 gunshots.”

KTNV broke into programming and started the 11 p.m. newscast at 10:53. Weekend anchor Christopher King tossed to reporter Joe Bartels, who was also live from the strip.

KBLR, the Telemundo station in Las Vegas, started coverage at 11pm and went for eight hours uninterrupted through this morning.  The station extended live local coverage throughout the day after airing Telemundo’s national coverage in the morning from 7-1oam.All of the stations used a variety of live shots, rooftop cameras and social media videos and images to cover the event. Non-stop coverage in the market on television and online, including live streams on Facebook live, has continued through the morning.

The now deceased gunman, who has been identified as Stephen Paddock, was perched on the 32 floor at the Mandalay Bay hotel opened fire on a country music festival Sunday night. More than 50 people were killed, over 400 injured.