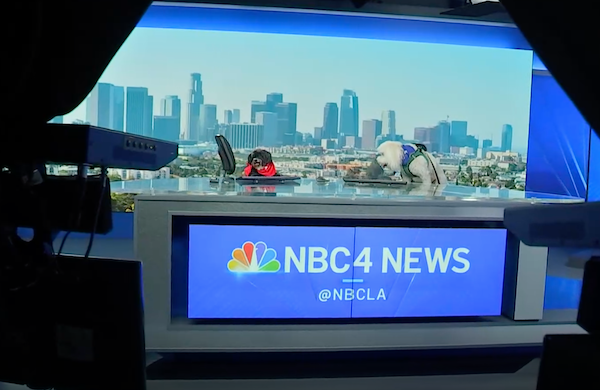 Nothing warms the cynical heart of a journalist more than puppies and kittens…or cake…and maybe pizza…sorry I got distracted there.

Anyhoo, with this in mind, KNBC and and Telemundo 52 newsroom staffers were treated to an invasion of cuteness last week (minus the pizza and cake) in support of the owned station’s Clear The Shelters initiative.

During the month-long initiative NBC owned stations team up with local animal shelters to create awareness about pet adoptions and raise funds to support animal welfare. The initiative has resulted in tens of thousands of local adoptions since its inception in 2015.

“We are pleased to bring NBC4 and Telemundo 52 Clear The Shelters to Southern California for the eighth year and harness the collective power of our stations to drive public awareness surrounding pet adoption and help alleviate the impact on local animal shelters,” said Todd Mokhtari, president and general manager of Telemundo 52 and NBC4.

In LA, at least 70 animal shelters and nonprofit rescue organizations throughout Southern California are partnering with KNBC and Telemundo 52.