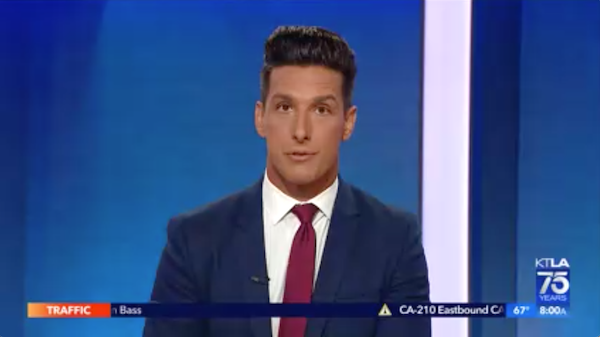 KTLA morning anchor Mark Mester has been fired following an on-air apology for how the Nexstar owned station handled the departure of his former co-anchor Lynette Romero.

According to the Los Angeles Times, general manager Janene Drafs, “announced the firing with a brief speech during a meeting in the newsroom around 1:15 p.m., saying, ‘[Mester] is no longer at KTLA5,’ staffers who were present for the announcement told The Times Thursday.”

Mester’s bio has been removed from the station website. He was suspended after the on-air goodbye on Saturday morning.

The whole drama started after entertainment reporter Sam Rubin informed viewers about Romero’s departure on Wednesday September 14. The station also sent out a tweet saying “After nearly 24 years at KTLA, our Lynette Romero has decided to move on and pursue another opportunity. We wish Lynette nothing but the best of luck on her next chapter.”

“After nearly 24 years, Lynette Romero, our friend Lynette, has decided to move on from anchoring our weekend morning news,” said Rubin. “KTLA management had hoped she would stay here her entire career—and KTLA worked hard to make that happen—but Lynette has decided to move onto another opportunity elsewhere.”

On Saturday morning, Mester followed that up with an on-air apology saying that what happened Wednesday was “rude” and “cruel.”

“It was inappropriate and we are so sorry,” said Mester. “I also want to say sorry to Lynette Romero, because Lynette I love you so much, you really are my best friend. You did not deserve what happened to you on Wednesday.”

The Times added that said some newsroom employees felt Mester had “violated their trust” by going off script in his goodbye.

Staffers said producers had written a script for Mester to read to send off Romero, accompanied by photos and clips of her broadcasts. He had also hired a plane with a banner to fly over the station with the message: “We love you Lynette.” Mester had pitched producers to include footage of the plane in the segment but was rejected.

Mester did not immediately respond to The Times’ request for comment. Nexstar told TVSpy “As this is a personnel matter, we will have to decline comment.”

>UPDATE: Nexstar confirmed Mester no longer works at KTLA. They also sent a statement from Drafs about Romero:

“After 24 years, Lynette Romero has decided to move on from anchoring our weekend morning news,” said station gm Janene Drafs. “We really wanted her to stay—and KTLA Management worked hard to make that happen. Lynette decided to leave for another opportunity. We had hoped she would record a farewell message to viewers, but she declined. Lynette has been a wonderful member of the KTLA family and wish her and her family the best.”