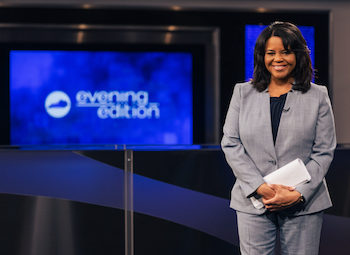 The newscast will be anchored by Renee Shaw and will be produced by KET’s public affairs team. Shaw has worked at the station for more than 25 years and hosts the station’s live public affairs discussion program Kentucky Tonight.

“Viewers often tell us how much they trust and appreciate our thoughtful approach to public affairs. And because of this, one of the most frequent requests we’ve received has been for a nightly series to cover the day’s newsworthy events,” said Shae Hopkins, KET’s executive director and ceo. “As Kentucky’s only statewide media, KET is uniquely positioned to bridge the gap between local and national news sources by producing a program that truly serves the entirety of our great state.”

“I’m proud of the reputation KET has built for thought-provoking and comprehensive coverage—and Evening Edition builds on that tradition in an exciting way,” said Shaw. “Evening Edition will go beyond what’s making news each day to tell the stories that help Kentuckians understand each other a little better, connect communities and inspire us all to build an even stronger Commonwealth.”

Evening Edition will air at 6:30 and 11 p.m. KET already produces a one minute update focusing on Covid that airs before and after PBS NewsHour.

Evening Edition also will be available as a podcast at KET.org/podcasts.