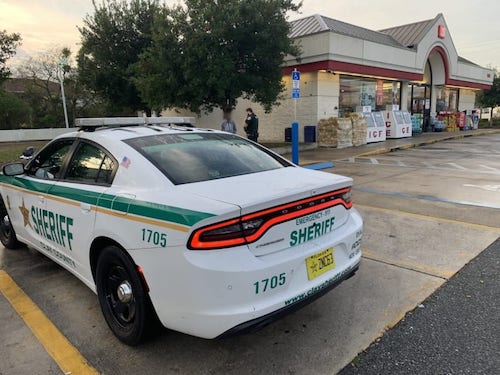 WJXT reporter Aaron Farrar and photojournalist Riley Storey found a 12-year-old girl who had been reported missing this weekend, right after doing a live shot about the missing girl and her sister.

“It started just after 7 a.m. in Middleburg,” Farrar said in describing how he and Storey were able to help deputies find the girl. “I had just wrapped up my live shot about two young sisters that had gone missing in the small Clay County town.”

“We got back inside the news van to prepare for another report at 8 a.m. and about 15 minutes later, I happened to look up and saw a young girl walking past the van and through the Waffle House parking lot. She matched the description deputies gave of the missing 12-year-old girl.”

Farrar said the girls’s grey hoodie and white crocs caught his attention. While Farrar called 911, Storey approached the girl to confirm her identity.

“At first, she just looked at me and then I said her name. ‘Are you that girl?’ She said yes and I said, ‘Great,'” said Story. “‘Your sister is missing, too. Where is she?’ She would not tell me at first. I said, ‘It’s okay. You don’t have to tell me. Just tell me where if she is safe. I just wanna make sure she was safe.’ She said, ‘Yes, she’s safe.’”