NEXT:WFLA Photographer Paul Lamison Dies After Heart Attack; He Was 57
PREVIOUS:Here's Your Weekly Roundup for the Week of August 5 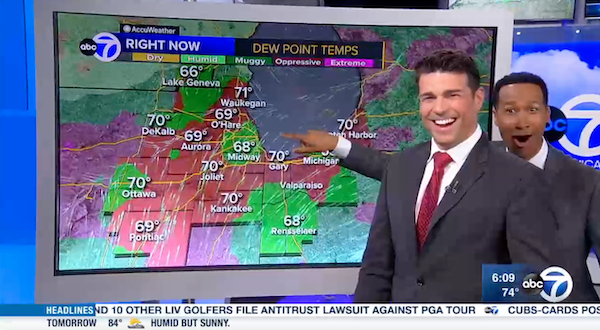 As the kids say on social media, WLS meteorologist Greg Dutra was “today years old” when he discovered the weather monitor he’d been using on-air was a touchscreen during yesterday’s morning newscast.

In a video he posted to Twitter, the Chicago morning meteorolgist can be seen accidentally brushing his hand against the screen, causing the the local area map to move. His reaction? “I can do that? No way!”

The discovery caused a ripple of excitement in the studio. At one point he was joined on camera by Terrell Brown, who gave the screen a spin.

This wasn’t in the training manual! @TBrownABC7 @valwarnertv and I go OFF THE RAILS when I discovered the TV is a touch screen while on-air on @ABC7Chicago 😂 pic.twitter.com/almrdxqz3d