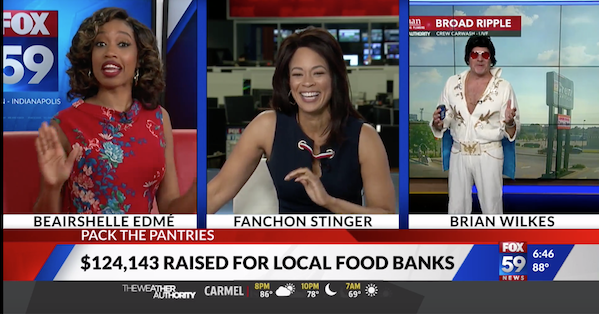 WXIN says during its virtual fundraiser for Pack the Pantries last Thursday and Friday, Wilkes said that he would do an entire forecast dressed as Elvis in order to raise more money.

So last night, viewers got much more than promised when Wilkes walked on to the set to the theme from Family Feud before serenading viewers and co-anchors Fanchon Stinger and Beairshelle Edmé with a rendition of “Are You Lonesome Tonight.”

Wilkes said he became an Elvis impersonator in college to make some extra money. Speaking of extra money, his stunt helped the station bring in $12,000 for the effort.

On its Facebook page, Pack the Pantries says it “raises awareness about issues of hunger in our community and encourages residents to help their neighbors.” Click here to learn more about donating.

A spectacular performance by our own Chief Meteorologist @BrianWilkes59wx