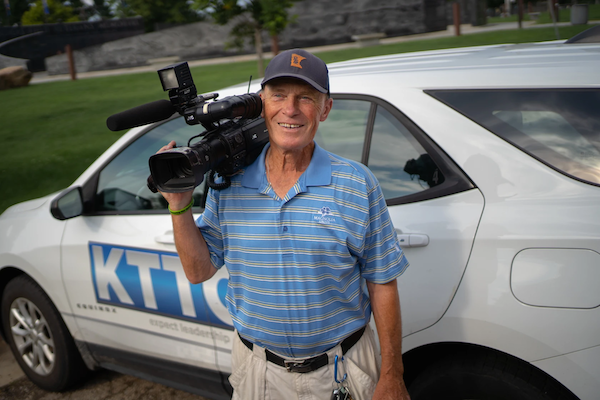 In today’s roundup, we show the stories we didn’t have time to get to this week. This week’s stories range from a photographer celebrating a half a century at a station in Rochester, Minn., to a Mississippi station helping kids with school supplies.

Here’s your weekly roundup for August 5:

KTTC photographer Chuck Sibley reached a milestone on Monday. He’s been at the Rochester, Minn., station for 50 years. Click here

WHOI and WEEK recently announced that they’re combining operations. Click here to read about it.

Former WYMT anchor Sheri Sparks has returned to Eastern Kentucky to help her hometown after the recent flooding. Click here to read about it.

Here’s a press release from WAPT in Jackson, Miss., about the station’s efforts to help local kids with school supplies.

Donations were collected in a single day at Walmart locations in Hinds, Madison, and Rankin counties. This year’s drive also included an online donation option for those unable to donate in person.

“Our community never disappoints when it comes to helping neighbors in need,” says WAPT President and General Manager Peter Keith. “Rising prices have impacted all of us this year, particularly as families head back to school. Generosity and giving are needed more than ever, and we encourage everyone to continue to give whenever they can.”
In the four years of School Tools, 16 WAPT has collected over 10,000 school supplies and over $29,000 in monetary donations for the United Way of the Capital Area.

Nearly 1 in 4 Jackson Metro families currently live at or below the poverty line, according to 2020 U.S. census.

Sinclair created two positions in its digital executive leadership team. The release is below:

“Lou and Richard bring a wealth of experience in content development and user engagement to the company, and we’re thrilled to have them in new roles supporting Sinclair’s continued focus on digital audience and revenue growth,” said Cotlove. “Their work will be a key part of expanding consented first-party data across our digital ecosystem and delivering new types of storytelling to our users.”

As VP, Audio Programming for Sinclair, Cooke will be focused on growing the company’s news and sports business in podcasts, audio device platforms and other areas of audio distribution. Cooke joins Sinclair from podcast studio Cadence13, where he was VP of Programming and Development. At Cadence13 he oversaw the launch and growth of dozens of podcasts across a variety of content categories, winning multiple Streamy and Webby awards. He developed programing alongside a broad group of talent including Tom Brady, Doc Rivers, CJ McCollum, David Spade and Emma Chamberlain. Prior to his time at Cadence13, Cooke launched the podcast division at FOX Sports, managing podcast production, sales and growth strategies for the company. He has also worked as a producer at ESPN across radio, TV, and digital. Cooke holds a Bachelor of Arts in Mass Communications and Media Studies from the University of Connecticut.

“I could not be more excited to join the Sinclair family to help guide our audio strategy. Sinclair has long offered premium content across a variety of verticals. I’m looking forward to utilizing audio and podcasting, one of the fastest growing mediums for content, to continue expanding our offerings to our audience,” said Cooke.

As VP, Consumer Data and Strategy, Ferrara will now oversee the company’s consumer data platforms, enabling new personalized services for Sinclair’s digital audience and powering expanded marketing and sales capabilities. Ferrara, who joined Sinclair in 2018, previously managed Sinclair’s email and newsletter business and operations. Prior to his roles at Sinclair, he served as Chief Content Officer at Bankrate.com, during the brand’s turnaround and subsequent sale to digital marketing company Red Ventures. He also spent ten years at the Associated Press, where as a VP he oversaw a wide swath of the news agency’s digital transformation and content areas. Ferrara holds a Bachelor of Science in Journalism from the University of Maryland.

“I’m elated to take on this role as data becomes more essential for businesses and consumers,” Ferrara said. “Sinclair is always innovating in media and I’m looking forward to doing so with consented consumer data across the company.”