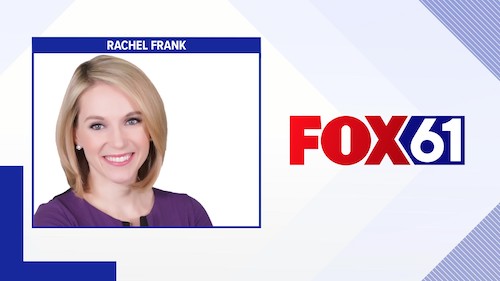 WTIC chief meteorologist Rachel Frank found out she has supporters in high places after she spoke out about the criticism she’s received over her forecast of tropical storm Henri, which swept through the area this week.

In her tweet, the Connecticut meteorologist said she knows she should have thicker skin and that she’s lucky to have a career she loves. “But this week has been challenging,” she admitted.

“I’m on day 8 of work. Missed my cousin’s wedding,” wrote Frank, who has worked at the Hartford Fox affiliate since 2008.. “Now I’m getting venomous messages insulting my intelligence and my appearance. I’m ‘pathetic,’ ‘dumb,’ ‘sensationalist.’ ‘A blonde that won’t stop talking.'”

WABC chief meteorologist Lee Goldberg backed her up by writing, “Forge through the headwinds Rachel. You do outstanding work! Much respect.”

In an show of support, Goldberg was joined by Connecticut Lt. Gov. Susan Bysiewicz, who said the state was lucky to have Frank and that “these sort of unacceptable messages are what women still face all too often in their career.” Bysiewicz also told her to “ignore the haters and keep up the good work for our state.”

Connecticut Senate Majority Leader Bob Duff also chimed in. “Social media gives miserable people a platform to spread their miserableness,” he said. “Everyone who paid attention was prepared for the storm. The fact we were spared saved lives, money and other precious resources.”