NEXT:Chicago Sports Anchor Reportedly On the Way Out After Remark About Co-Anchor
PREVIOUS:Sinclair Lays Off 5% of Workforce, Blames Covid-19 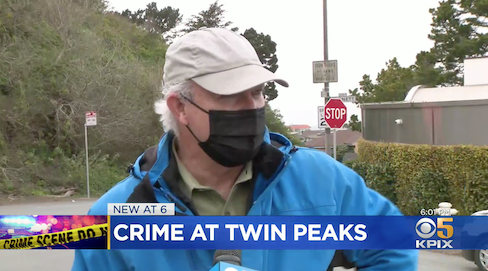 KPIX reporter Don Ford was robbed at gunpoint yesterday while reporting about a series of car break-ins around Twin Peaks in San Francisco.

Ford was about to interview nearby homeowners when a car pulled up. “Three guys jumped out,” the reporter for the CBS-owned station recalled. “One had a gun, put it in my face and said, ‘We’re taking the camera.’”

No one was hurt in the robbery. San Francisco police said the camera was recovered later Wednesday, but no further details were available.

Last month, a KNTV crew was robbed at gunpoint in another part of the city. The NBC-owned station had no comment at the time.

“I was worried that this is what’s gonna happen because as thieves get more and more brazen they do more and more brazenly things,” said one of the neighbors, who asked not to be identified. “I’m not making that up. We just had that experience today.”

Here’s video of the report from KPIX: