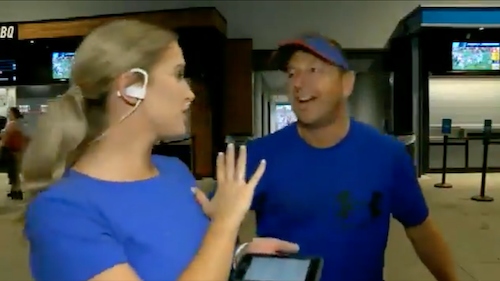 WTOC sports director Lyndsey Gough said she was “all kinds of violated” during the college football matchup between Clemson and Georgia.

Gough, who has worked at the Savannah, Ga. CBS affiliate since 2019, said fans touched her and her equipment while she was set up for live hits during the game Saturday.

In a video she posted to Twitter, you can see fans walking by with some stopping behind Gough to mug for the camera and some attempting to interact with her.

At one point, she had to tell a male fan to not touch her.

“After the first guy touched me I started rolling… this isn’t even all of it,” Gough said on Twitter. “So uncomfortable. Can we please respect people’s space?”

Gough got numerous replies to her tweet, including some comments telling her she was in the wrong job and that she should go back to “grammas kitchen and bake some muffins.” But other anchors spoke out in support and even offered advice.

“Awful!!” responded Jeremy St. Louis, CBS Sports HQ anchor. “But, as any veteran sports reporter will tell you: 1. Coordinate w/stadium security/team pre-event, including having 1-2 w/you during hit. 2. Coordinate w/venue for safe spot on concourse for LIVE hit – including roping off if needed. 3. ALWAYS expect worst from fans.”

WXIA sports anchor Maria Martin said she had a similar thing happen to her the day before. “This scene unfolding for Lyndsey is horrific,” she said. “Help women. Help women in sports. This is gross.”

After the first guy touched me I started rolling… this isn’t even all of it. So uncomfortable. Can we please respect people’s space pic.twitter.com/1r0VQVoBoq