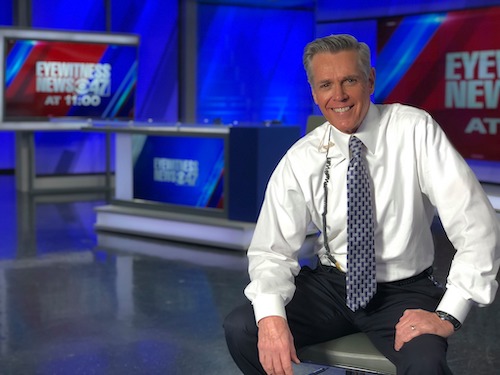 Malloy has worked at CBS affiliate KSEE for 17 years and began his TV career in 1984. Over the course of his career, he has anchored more than 30,000 newscasts and written more than 10,000 stories , he shared in a lengthy Facebook post announcing his decision.

“When I started my television broadcasting career, I used a manual typewriter and banged through four or five copies of carbon copy paper—with gusto,” he wrote. “No auto-correct. No spell check. No liquid paper Wite Out for mistakes. Just an emphatic flurry of ‘X & O’s’ to cover up the typo and keep writing. …I remember smoke-filled newsrooms … and a News Director who would chain smoke unfiltered Camel Cigarettes. I remember tape to tape editing in an analog world with no cell phones, pagers or internet. Imagine that.”

Malloy started his career at KESQ in Palm Springs in 1983. He’s also worked at WMUR in Manchester, N.H., WJAR in Providence, R.I. and KTVT in Dallas.

“I am humbled and honored to have worked with some of the greatest journalists and photographers in the business,” he wrote. “I count myself as blessed, protected, lucky and fortunate.”

Upon his retirement, Malloy says he plans to return to Texas to spend time with his grown children and spend time volunteering and giving back to his community.

“Someone recently asked me what I thought my broadcasting legacy would be,” he wrote. “Good question. I told him that I hope people will say, ‘He was fair. He stayed in his own lane.'”
< Previous Article
Next Article >
Advertisement
Advertisement
Get TVSpy delivered straight to your inbox
Advertisement