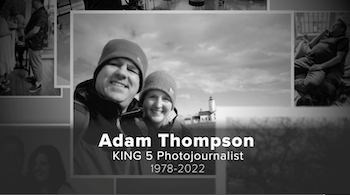 On Saturday, Jake Wiederrich, the news director at Seattle Fox owned station KCPQ, reached across affiliate lines to offer his station’s help so the staff at NBC affiliate KING could attend a memorial for Thompson.

“Jake Wiederrich and I are both News Directors in Seattle. We are competitors. Until we’re not,” KING news director Julie Wolfe wrote on LinkedIn. “Saturday morning, as soon as he heard about the death of KING 5 Media Group photojournalist Adam Thompson, he sent an email offering condolences and offering to help, including newsgathering help so our team could attend a memorial.” 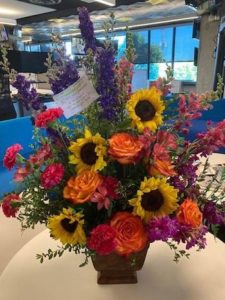 nd then, today, these beautiful flowers arrived in our newsroom,” she wrote. “I’ve always believed that a strong journalism market makes us all better,” wrote Wolfe. “While we compete in so many ways, we all believe in the importance of an informed public.”

Thompson died early Friday morning after being diagnosed with brain cancer one month ago.

Before joining KING last April, Thompson worked in Portland, Oregon and Tucson, Arizona. He started his television career in Medford, Oregon as a production assistant.

“Thompson will be remembered for his creativity, positive attitude and love of journalism, but, more importantly, as a great human being,” KING wrote on its website.