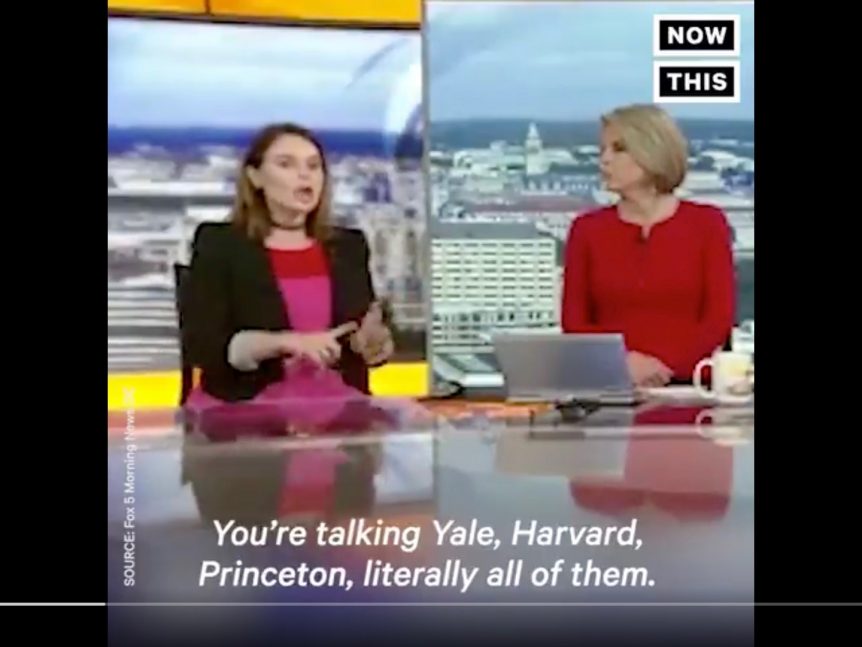 A Fox 5 DC morning show segment has gone viral and not for good reason.

Texas high school Michael Brown made headlines last week for being accepted to all 20 colleges he applied to. The video of his reaction to the acceptances made rounds on the internet. Some of the schools included IVY League schools including Harvard and Yale.

Cut to a WTTG morning show segment when co-anchor Holly Morris and contributor Sarah Fraser gave thoughts on the video and Brown’s acceptances.

“It’s a little ridiculous that this kid applied to 20, taking away a spot and basically waitlisting another kid,” Fraser said.

“It’s a little obnoxious because you can only go to one, you can only take one full ride, and you are taking a spot from someone else who worked really hard,” Morris said.

Now This put together a video of the anchor’s reaction and cut it with Brown’s excitement after learning his acceptances.

Here’s a new one: Local Fox anchors criticized this Black teen for working TOO hard pic.twitter.com/sIwyciCC9j

The video has received more than 6 million views. The Fox anchors are being slammed for their insenstive reacion.

Fraser responded to critics on Twitter and even offered an apology to Brown, which he accepted.

I don’t feel that way. I have apologized to Michael and he accepted my apology. Michaels accomplishments aren’t up for debate. I have learned a valuable lesson.

Morris didn’t apologize. She has continued to defend her point.

I also said he is an amazing young man. This is not a racial issue. I would have the exact same opinion if the boy was white. https://t.co/gq8Edty0s8