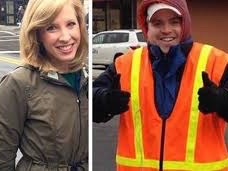 In an Op-Ed in the Washington Post, Andy Parker says since her death he started a foundation and has been outspoken about gun control. But recently, he discovered a number of videos on YouTube exploiting his mission and claiming that Parker’s death was staged.

He blames YouTube and its parent company Google for algorithms that push these types up videos up in the search engine.

Parker and her photographer Adam Ward were doing a morning live shot when a former employee shot them both on live TV.

You can read the entire piece here.