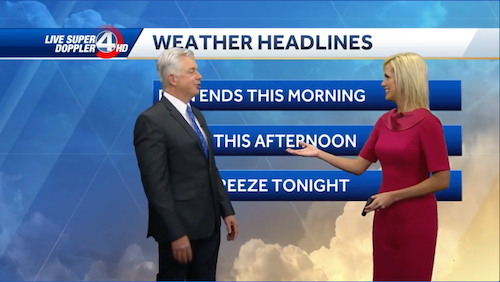 WYFF news anchor Michael Codgill had a curve ball thrown his way one day before his planned retirement.

While Codgill pointed out he had done weather “like a generation ago … by accident,” he successfully identified rain on the satellite maps before telling viewers it was “insane” that he was wearing a necktie so early in the morning.

“This is like surrendering the aircraft to a 12-year-old at 36,000 feet,” said Cogdill who then struggled with the maps and wondered when Lewis would save him. But, he caught his second wind on the Four Day Plus forecast and wrapped it up to the sound of what he called “sympathy applause.”

Codgill is set to retire tomorrow after working at the station since 1989.