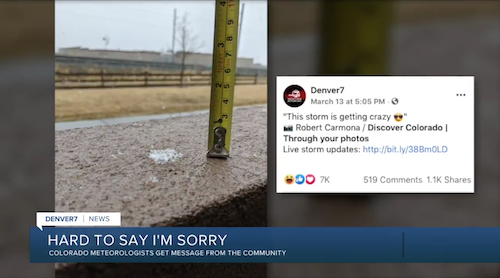 We’ve seen versions of this story before: A station’s meteorology team predicts a monster storm. It doesn’t show up or is weaker than predicted. Viewers get upset and claim fake news on social media.

So when Denver ABC affiliate KMGH had been predicting a major snowstorm all week and no snow was to be found, viewers got cranky. The station even did a story explaining the intricacies of predicting weather, but stood by its forecast.

Then Sunday rolled around, and the Denver airport saw 27 inches of snow—bringing to the area the fourth-largest snowstorm in Colorado history.

“Judging by the social media comments and emails Friday night and Saturday morning, a lot of people seemed to lose faith in the forecasting abilities of the Denver7 weather team,” the station tweeted.

The station took a victory lap, and meteorologist Jason Gruenauer had a little fun with it in a segment for the station, where he had some naysayers sign an apology card.

“Our #Denver7 weather team won’t say ‘I told you so’ about the incoming snowstorm, so I did it for them,” Gruenauer tweeted.