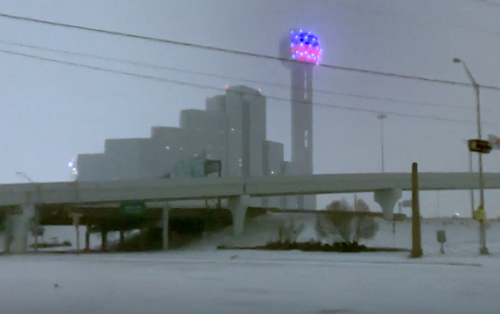 When a major winter storm swept through several states last week, local stations had to figure out how to keep on reporting the news despite power outages, water shortages and dangerous conditions.

TVSpy asked the president and general manager of Dallas ABC affiliate WFAA and svp of Tegna Brad Ramsey about what happened and when the news cycle switched from “what happened” to “why did this happen?”

As Tegna svp, Ramsey also oversees stations in 11 Texas markets. Tegna stations cover 87% of the households in the state and the station group has nearly 1,200 employees across Texas.

TVSpy: For someone who doesn’t live in the affected area, can you describe what happened? At what point did you think, OK, we have a problem?
Ramsey: We knew in the middle of last week that this was going to be a historic Texas storm, and we were largely prepared for the storm itself. Our stations started booking hotel rooms last Friday and Saturday, for what we knew would be extended hotel stays near our stations, because we knew roads would be covered and temperatures would be well below freezing for many days in a row, all across the state. I was scouring hardware stores in Dallas last Saturday morning for snow shovels, hand warmers, and pool salt for sidewalks. The pool salt was easy to find; as you can imagine the snow shovels and hand warmers were not. What we were not prepared for, and what the entire state of Texas was not prepared for, was the rolling blackouts not rolling. It became clear Monday afternoon that they were simply blackouts. I would estimate that more than half of our 1,200 employees in Texas were without power at some point Monday and/or Tuesday, and a notable portion of them for 24-36 hours straight, or more. So, I would say the “Texas, we have a problem”moment—to borrow the famous, but erroneous, Houston phrase—happened Monday afternoon. That’s when we realized we had more of a humanitarian crisis than a weather crisis.

For other news folks who may read this, do you have a plan in place for situations like this?
Our content, production and technology teams across our 11 Texas markets started holding “storm prep” meetings during the middle of last week. Most stations were including the chief meteorologist in those discussions, and some of our stations add a meteorologist to leadership team meetings in situations like these. There’s no one more equipped to know exactly what’s coming than our local meteorologists on the ground, and that’s why we were largely prepared for the storm itself. Also key to our prep were meetings that were held last weekend with all of our news directors across Texas, sharing ideas and best practices. As the story and the situation unfolded, we relied more and more on our ‘hurricane plan’ that we use in markets like Houston and Beaumont, but in this case, we were using those tactics all over the state. Our stations across the state successfully shifted resources to digital content very early in the week, knowing that as people lost power, they were going to rely even more heavily than normal on our mobile website and app content. On Tuesday, at the height of the power outages, we had nearly 4 million visitors to our websites across Texas. I think at least part of our success can be attributed to focusing just as much on the written word as we did on video, knowing that cell service was jammed in a lot of places and for many consumers it was easier to access text than video.

What’s your No. 1 concern during a crisis like this and at what point does the story go from, “How can we help?” to “Why did this happen?”
Our top priority during a crisis like this is keeping people safe, and of course that means our audience, but first and foremost it means our employees. I tell our teams in times like this that no sound bite, no piece of video, no story is more important than their own well-being. If our people aren’t fed, warm, and safe they can’t do their jobs. We were more so in the people business than the media business this week. I’d like to believe that’s always the case, but it was highlighted this week. Our employees in San Antonio worked in a newsroom without heat for two days–the power was on, but the HVAC system broke down—so station leaders brought in electric blankets and heating pads to keep everyone warm. We have employees in every one of our Texas markets that still don’t have running water (as of midday Friday), so we are using employee volunteers to shuttle bottled water to those team members. Back to your original question, I think it has been a balancing act all along–we have to take care of our people from the outset, but we did not delay asking tough questions to officials as this all unfolded. Those questions will continue until we have solid answers, and solutions.

Are you talking to other stations about what is working and what isn’t?
We have been in constant contact across our Texas stations, starting with the news directors having daily meetings over last weekend, and as this shifted to a humanitarian crisis on Monday we started daily general manager huddles as well. I have checked in on our stations’ general managers across the state daily, 2-3 times a day in some cases. The storm prep part of this situation is ingrained in all of us, but the crisis many of our employees were facing in their homes was very new and raw for many of us. We have been sharing and using ideas on everything from how to get station toilets to work when the water is shut off, to how to keep diesel fuel in our generators from gelling in near-zero temperatures. I would say before this week most, if not all, of our GMs in Texas—including me—had no idea diesel fuel could essentially freeze. Thanks to being in constant contact and sharing best practices, we were able to prevent a really tough situation from spiraling into a catastrophic one.

Watching Dallas CBS-owned station KTVT through CBSN, I saw ERCOT CEO Bill Magness answering questions on the station daily about the power situation. Is WFAA doing something similar?
WFAA, and all of our stations around the state, are asking the very tough questions that need to be asked. Not just of the ERCOT CEO, but also of Governor Abbott, and of state and federal officials in each of our markets. Texans deserved better this past week, and no one is better positioned to get answers and drive positive change than our 11 stations across Texas. I am so proud of the work our 1,200 employees in Texas have done this week to keep their communities informed and safe, and we will do equally good work in finding and holding accountable those responsible for this week’s failures in the Texas power grid.

Is there anything you can take away from this as a news organization, or is it too early?
We always do very deep post-action reviews in cases like this. We will do those at the station level, and again thanks to idea sharing—and an idea from our Austin GM Kristie Gonzales—we will do one at the statewide level as well. We were very prepared for the storm, not so prepared for the long-running power blackouts and the humanitarian crisis that emerged. We are always willing to look in the mirror and admit where we could have done better. That’s the only way we can be even stronger the next time around—that’s the Texan in all of us.