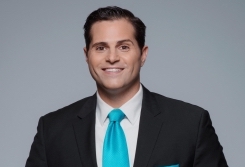 Birmingham, Ala. anchor Chris Sign was found dead by first responders Saturday morning. He was 45.

Sign first worked at ABC affiliate WBMA between 2000 and 2005. He came back in 2017 as a weeknight anchor after working as a reporter and then a morning anchor at KNXV in Phoenix for almost 13 years.

WBMA says Sign passed up an opportunity to work at a network to come back to Birmingham.

That decision put him in a place where he could see his boys off to school in the mornings, watch them play baseball in the evenings, and take them fishing on the weekends.”

Al.com reports Hoover, Ala. 911 got a call at 8:13 a.m. Saturday about a person down at a residence. When police and fire arrived they found Sign dead.

Police say the death is being investigated as a suicide.

“We are still in shock over this news,” chief meteorologist James Spann wrote on Twitter. “Chris was a very good friend, and an incredible journalist. The grief today has been overwhelming.”

“Our deepest sympathy is shared with Chris’s loving family and close friends,” said Sinclair Broadcast Group vice president and general manager Eric S. Land. “We have lost a revered colleague whose indelible imprint will serve forever as a hallmark of decency, honesty and journalist integrity. We can only hope to carry on Chris’s legacy. May his memory be for blessing.”

We are still in shock over this news. Chris was a very good friend, and an incredible journalist. The grief today has been overwhelming. https://t.co/ulV8V5IxsK