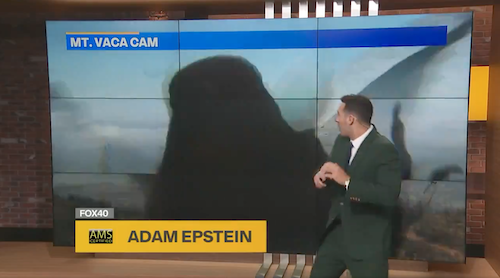 KTXL morning meteorologist Adam Epstein was startled by the sudden appearance of what looked like a giant bird on his weather board.

During one of his forecasts last week, the meteorologist for the Sacramento, Calif. Fox affiliate had its Mount Vaca camera up when a bird that could have been a hummingbird popped into view and hovered near the lens.

“Whoa, whoa, whoa!” said the startled Epstein, who has worked at the station since 2018. “What is going on? Never seen that before. Never! Wow. First time Vaca cam has some action aside from some fog out in Solano County. Frightening stuff!”

Epstein later tweeted about the moment.

I guess this hungry bird thought I looked like a snack 😎 pic.twitter.com/Vo162FkEMt