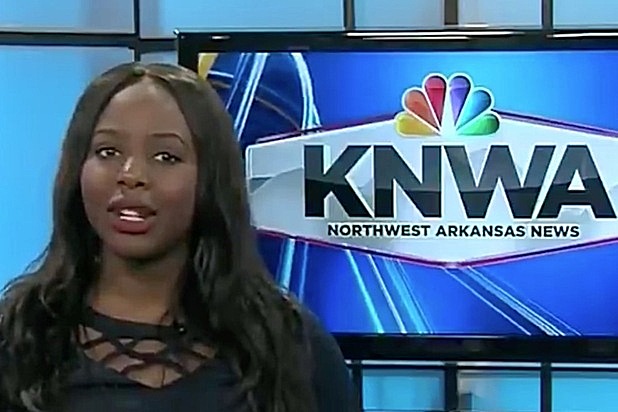 KNWA reporter Nkiruka Azuka, whose last name off-air is Omeronye, is out of jail after a judge found her in contempt of court.

The ruling dates back to an incident in October. She was covering a capital murder trial in Benton County. She took an audio recording on her cell phone of the court proceedings. She says she was unaware of the no recording rule and that she only intended to use the audio as notes.

On Monday, the judge sentenced her to 10 days jail time, with seven of those days suspended. She was released Monday night.

The station general manager Lisa Kelsey released the following statement regarding the incident:

“On behalf of KNWA/FOX24, we regret the incident regarding reporter, Nkiruka Omeronye, who goes by Nkiruka Azuka on air. Nikiruka has offered a sincere apology to the judge, to her colleagues, and to the station. As we do with all our journalists, we have counseled her on obeying all courtroom rules, as well as Arkansas Judicial Guidelines.”

The National Association of Black Journalists also weighed in on the incident, calling the sentencing excessive.

NABJ is disheartened to learn that KNWA/FOX24 reporter Nkiruka Azuka has been sentenced to 10 days in jail with 7 days suspended, 6 months probation and a ban from covering a murder trial in a judge’s courtroom, according to news reports. NABJ believes the sentence is excessive.

As reported by her station, Azuka is being jailed for a simple oversight, that she apologized for, which occurred while working on a news assignment. She stated that she was unaware of a court’s rule that did not permit her to record while reporting on a murder trial. She later confirmed that she did not publish the recordings.

According to her station, it appears there was no ill intent in Azuka’s efforts to simply do her job and ensure accuracy in her coverage.

We advise our members and all journalists to ensure they are aware of federal, state and local laws when it comes to recording in public or municipal spaces.

We encourage newsrooms to also provide training on this issue and we will continue to incorporate such training into our programming.

Omeronye’s attorney, Jonathan Nelson, told the judge he did not believe his client intended to break the court rules.