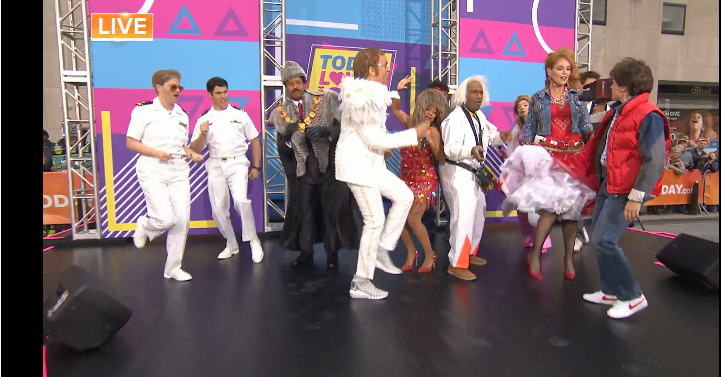 For a little while this morning, two of the broadcast morning shows moved away from talking about Trump, and got into the Halloween spirit.

“Today Loves the ’80s” featured the co-hosts dressing as some of America’s most famous figures and characters from the decade, after going country the prior year.

Dylan Dreyer dressed up as Marty McFly and Al Roker as Doc from Back to the Future.

Craig Melvin was Prince Akeem from Coming to America, but as his wife, former ESPN host Lindsay Czarniak notes, he’ll be rocking a different costume this evening:

We know what @craigmelvin is gonna be tonight (think T-Rex daddy) but we can’t wait to see this @TODAYshow #halloweencostume reveal!!!! We have no idea what to expect #HappyHalloween2018 !!!!!!!!! pic.twitter.com/JWLViI1Okx

Matt Lauer traditionally dressed up as a woman for Halloween. No one took on that task this year.

The hosts talked about how the costumes actually all came together:

Take a behind-the-scenes look of how our TODAY team took on a totally tubular 80’s transformation. pic.twitter.com/K8xoQAeoxl

First, there was Robin Roberts as Dominique Devereux from Dynasty, followed by Rob Marciano as Zack Morris from Saved by the Bell, Amy Robach as Peg Bundy from Married With Children, Lara Spencer as Captain Merrill Stubing from The Love Boat, with Paula Faris and T.J. Holmes dressed up as the cruise directors.

Ginger Zee as Michelangelo from Teenage Mutant Ninja Turtles, George Stephanopoulos was Alex P. Keaton from Family Ties (Michael J. Fox should have made a cameo!?), Michael Strahan was Mr. T from The A-Team.

The latter gave the former a shout out:

Michael J. Fox might not have made a cameo, but Bonnie Tyler did, appearing live on set to perform “I Need a Hero.”

.@bonnietofficial bringing down the house here at @GMA!

🎶I need a hero
I’m holding out for a hero ’til the end of the night 🎶#HalloweenOnGMA pic.twitter.com/uyh7ZRBteD

There was 80s trivia time: