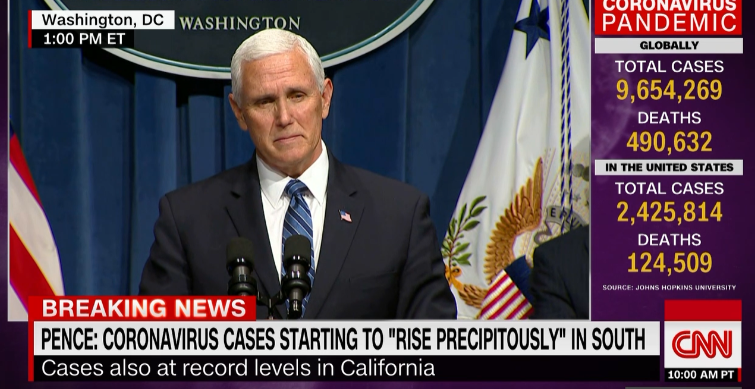 Led by vp Mike Pence, the White House coronavirus task force team gave its first briefing to the press in two months, as the pandemic appears to be worsening in many parts of the country, including America’s three most populous states, California, Texas, Florida. Arizona appears to be in trouble right now as well.

According to Johns Hopkins University, there are at more than 2.4 million cases of Covid-19 in the U.S., and 125,000 causalities that have been reported. And that’s as of publication time.

Today’s briefing was held at the Department of Health and Human Services, unlike previous press briefings, which were held inside the White House briefing room.

The presenters, led by Pence, made a series of presentations “to update the American people on the status of the coronavirus pandemic in the country,” and then took questions (but only a few, as we would later find out).

“With cases rising, particularly over the past week throughout the South, President Trump directed our task force to brief the American people on several topics,” said Pence, after offering his condolences to families who lost loved ones, talking about states’ reopening plans, touting improved job numbers and saying he was pleased to hear New York, New Jersey, Connecticut and people from the New Orleans area have seen rates declining.

Pence said Dr. Deborah Birx would speak about the 40,000 new cases that have popped up in America in just one day. Secondly, “we want to speak about what we’ve done and what we are doing at the federal level to support states efforts, particularly in the states where we see rising cases,” he said. Pence added that the task force would talk about how this moment is different from the last time the task force gave a briefing.

He later noted that despite all of the progress made, there are 16 states with rising rates and rising cases, and they would be focusing their presentation on those states. 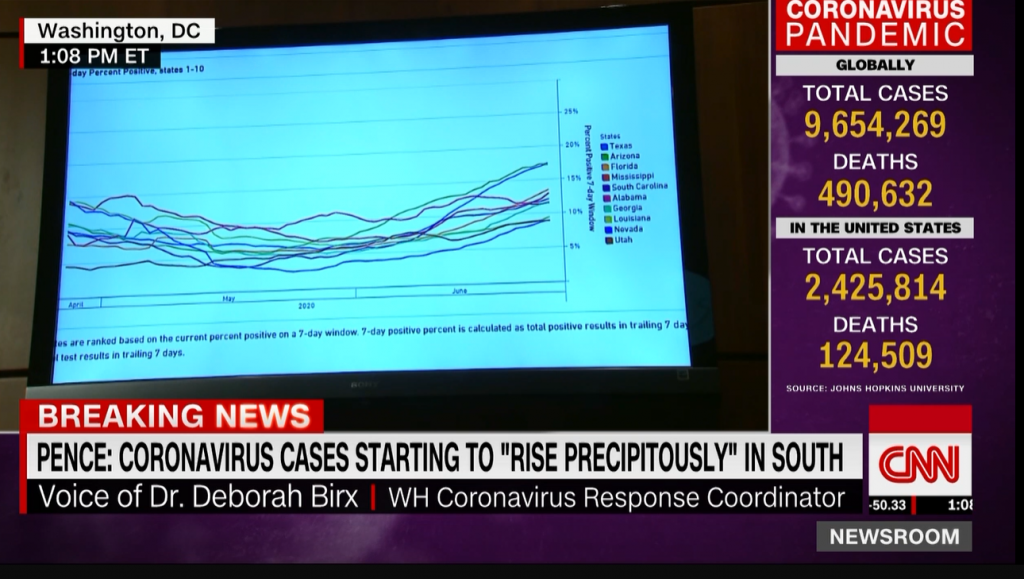 Pence, along with Dr. Birx, Dr. Anthony Fauci and secretary of Health and Human Services Alex Azar, reiterated the importance of social distancing, wearing face coverings, washing hands, etc., and pointed out that the number of young people, even those who may be asymptotic, appears to be abetting in the spread of Covid-19 throughout the South (though not intentionally, of course). Around half of the new cases are among Americans under 35.

CBS News White House correspondent Paula Reid was able to get a question in at the end. She wanted to know if we were seeing sort of a “do as I say, not as I do” approach from the White House, given the rally in Tulsa last week and an event at a full church in Arizona. Additionally, Pence did not wear any sort of face covering at the briefing, while Drs. Birx and Fauci did.

“Dr. Fauci has talked about not gathering in large crowds. Can you tell me why you continue to do this? Why the campaign continues to hold these rallies?” she asked.

The vp seemed to say that there are exceptions. “We have an election coming,” he responded, before referencing Americans’ First Amendment right to peacefully assemble, adding, “President Trump and I believe that taking proper steps, as we have created screening at recent events, and giving people the very best counsel that we have. We still want to give people the freedom to participate in the political process.” 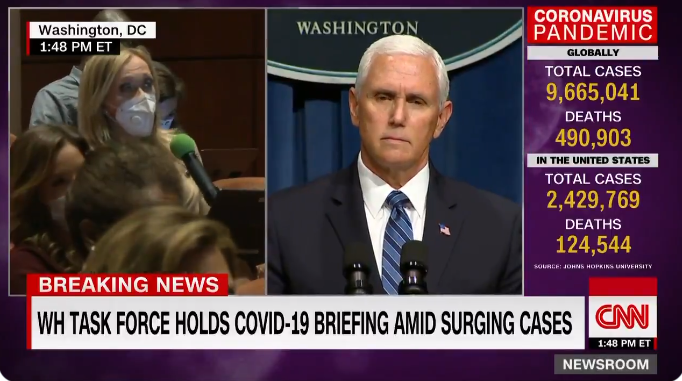 Pence also added that Oklahoma’s Covid-19 daily numbers have declined in recent days. Oklahoma currently has a little under 12,000 cases in the state, including two straight days with over 400 new cases. That is indeed good news for the Sooner State.