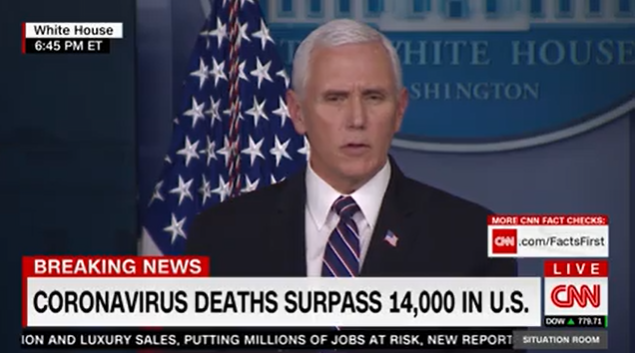 *UPDATE: There has apparently been a reversal on this policy, and high-level public health officials are once again permitted to appear on the network.

The dynamic between CNN and the Trump administration is worsening.

This means that going forward CNN viewers won’t be seeing Doctors Birx, Fauci or Surgeon General Adams being interviewed on the network’s programming and appearing in its town halls until the network takes essentially the entire briefing.

CNN oftentimes only broadcasts Pres. Trump’s Q&A session with White House correspondents, which sometimes includes the healthcare officials, live on-air. (CNN did use Pence’s opening remarks at yesterday’s briefing, as per the photo above.)

“When you guys cover the briefings with the health officials, then you can expect them back on your air,” a spokesperson for Pence reportedly told CNN.

According to CNN’s Oliver Darcy, Dr. Fauci appeared on the last four weekly CNN Town Halls, with Anderson Cooper and Dr. Sanjay Gupta. Pence’s office did not make him, or anyone, available for tonight’s 8 p.m. town hall.

Pence’s office, which is in charge of the TV bookings for the task force officials, made two nonhealthcare officials available to CNN in the last week. Defense secretary Mark Esper appeared on State of the Union with Jake Tapper on Sunday and White House economic advisor Peter Navarro appeared on Anderson Cooper 360 on Friday and New Day on Monday.

It is unknown whether MSNBC or the broadcast networks are on what seems to be something of a “blacklist” as well. They haven’t shown the entirety of the daily briefings either (though in the case of the broadcast networks, that’s partly due to not wanting to preempt their nightly newscasts).