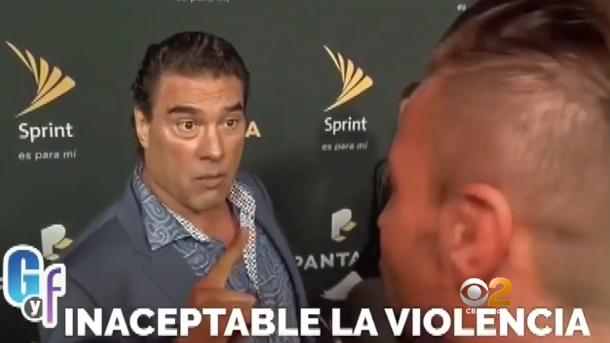 Relations between the press and those it covers can sometimes be contentious. But what transpired on a Hollywood red carpet Tuesday night was out of the ordinary.

Univision News entertainment reporter Paco Fuentes asked Mexican telenovela star Eduardo Yanez on the red carpet why his son had reportedly set up a GoFundMe page to pay for a car he had crashed, when he could’ve gone to his father for assistance.

According to CBS2 Los Angeles, Yanez didn’t appreciate the question, answering in Spanish, “If you’re so worried about my son, you send him the money or go talk to him.”

The journalist responded by saying people were curious and that he was just the messenger.

Yanez didn’t buy it, saying Fuentes was basically searching for a story that didn’t exist and that he was being disrespectful. Yanez then slapped the reporter in the face.

Watch at your own discretion:

“In my opinion,” she said, “Fuentes was just doing his job. And Eduardo needs anger management.”

This isn’t the first time a high-profile figure has used violence against a member of the press. Back in May, Montana rep. Greg Gianforte assaulted The Guardian’s Ben Jacobs on the eve of the special election that put him in office. Jacobs was trying to question Gianforte about the CBO report on the American Healthcare Act.