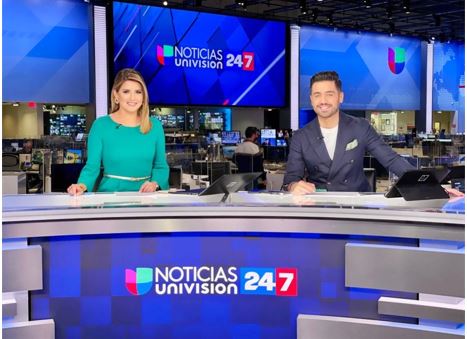 Univision is the latest media company to enter the rapidly-growing streaming news universe.

“Univision’s continued commitment to serving the Spanish-speaking community through rigorous journalism has allowed Univision News to be the No.1 most trusted source of news for U.S. Hispanics for over three decades,” says Univision News president Leopoldo Gómez González. “Noticias Univision 24/7 complements and strengthens our offerings and enables us to reach and serve our audience on their platform of choice, from TV to online and to mobile, with the highest quality news content and the most innovative storytelling.”

The new programming includes a new morning show (La Voz de la Mañana), which airs weekdays from 7-9 a.m. Hosted by Carolina Sarassa, Paulina Sodi and Maity Interiano, the morning news program “kicks off the day in a welcoming and conversational setting, featuring reporters from across the country, influential DJs and experts who talk about a variety of topics, including finance, health, education, wellness, lifestyle, social media trends, sports and more.”

The network will present live news every day from 1-3 p.m. ET. Hosted by Andrea Linares and Borja Voces, Noticias Univision 24/7 Daytime “brings breaking news and up-to-the-minute coverage of the most relevant trending topics.”

The streaming service will also present live evening news programming every day from 7-9 p.m. ET. Noticias Univision 24/7 Primetime will be co-hosted by Ayleen del Toro and Carolina Rosario as they present “the most relevant news of the day with commentary from some of the most trusted anchors and reporters from across the entire Univision news division at the local, national and international level.”

“This expansion of our news portfolio and digital operations represents one of the most significant and strategic investments in the Univision News division in history,” says Univision Television Networks Group president Luis Silberwasser. “Univision’s award-winning newsroom is an example of journalistic integrity and excellence, and, with the launch of the news streaming channel, our impact and reach will be every day, all day.”