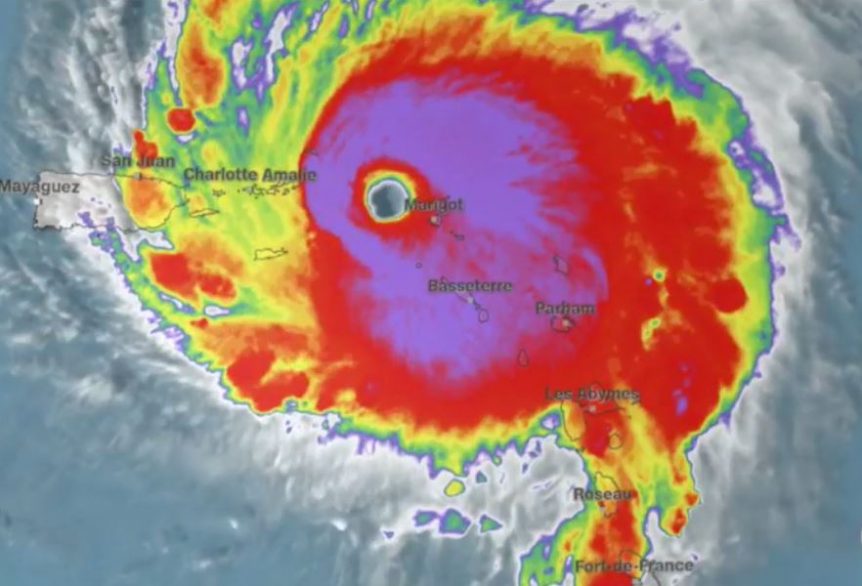 Hurricane Irma is officially the strongest Atlantic hurricane since Wilma in 2005.

As with Wilma, this category 5 hurricane is currently bringing maximum sustained winds of 185 mph, moving at 16 mph west-northwest (according to the NOAA), and is currently pummeling the small Caribbean islands of St. Martin and Anguilla. The storm could hit the British Virgin Islands, the U.S. Virgin Islands, and Puerto Rico as soon as this afternoon.

As of 4:10 p.m. ET, Irma is approximately 70 miles east-northeast of San Juan, Puerto Rico, meaning it could hit PR’s largest city at around 8:30 p.m. ET this evening.

Puerto Rico Gov. Ricardo Rosselló (D) has declared a state of emergency, and thanked Pres. Trump for his support.

Mr. President @realDonaldTrump thank you for standing by #PuertoRico at this time. Your support is essential to the island’s quick recovery.

Sen. Marco Rubio (R-Fla.) has expressed his support for the commonwealth.

Our prayers are with our fellow Americans in #PuertoRico We are ready to respond after #HurricaneIrma to help recovery.

Gov. Rosselló has called into shows on Weather Channel, Fox Business and CNN to talk about how PR is preparing for Irma.

.@ricardorossello on #Irma: “We’ve activated the whole National Guard…The @POTUS has an eye on this storm.” pic.twitter.com/8FMcm5BUU1

Irma is forecast to move towards the U.S. mainland and South Florida this weekend.

Florida Gov. Rick Scott issued a mandatory evacuation order for visitors and residents in the Florida Keys, which will officially go into effect tonight.

There is currently a mandatory evacuation order for all visitors in the FL Keys- this order will go into effect for all residents tonight.

Hurricane #Irma “is bigger than [Hurricane] Andrew. It will have more storm surge than Andrew.” – Gov. @FLGovScott to @GMA pic.twitter.com/swtsl6PqIG

TV newsers are heading to various locations to cover the storm.

Fox Newsers on the ground include:

Leyla Santiago and George Howell are there for CNN. Morgan Radford is there for NBC News.

We will continue to monitor the storm and add more names to the post as the week continues.