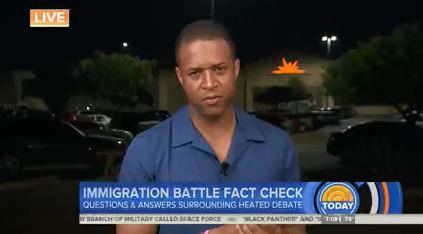 The story of the Trump administration’s “zero tolerance” policy that separates children from their parents who are crossing the U.S. border into Mexico isn’t leaving the collective mind of the national news media. At least not yet.

News networks continue to send their journalists and hosts down to McAllen, Texas.  MSNBC Last Word host Lawrence O’Donnell and All In’s Chris Hayes will host their respective prime time programs from south Texas on Tuesday. Stephanie Ruhle will be live from Texas today to anchor the network’s 9 and 11 a.m. hours.

Gayle King continued to report for CBS This Morning on Tuesday morning. 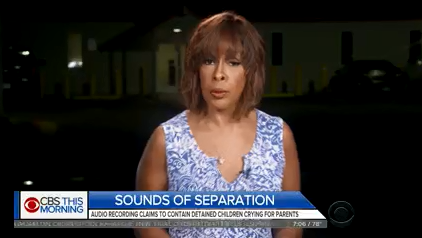 She interviewed civil rights attorney Jennifer Harbury, whose says her client got the audio to her, who then sent it ProPublica, who then spread it to the press and eventually wider public.

“I’m astounded that America of all places, my father having arrived at Ellis Island also frightened out of his wits at age 11, that of all places America would stoop to traumatizing and abusing children of refugees. How can we come to this?” — Attorney Jennifer Harbury pic.twitter.com/p6wYimZBRb

King had reported for CTM from Texas on Monday, as well as for last night’s edition of the CBS Evening News.

More than 2,300 children have been taken from their parents over the course of five weeks.

.@GayleKing went inside a detention facility in McAllen, Texas, hearing the first-hand stories of some migrants held there pic.twitter.com/GAxuwsbzKg

David Begnaud, who has become something of a household name, particularly in Puerto Rico for his reporting on Hurricane Maria, reported for Evening News last night. He sparked controversy yesterday when he used the word “cage” to describe what we saw at the detention facilities.

He reported from Hidalgo, Texas for CBS This Morning on Tuesday. 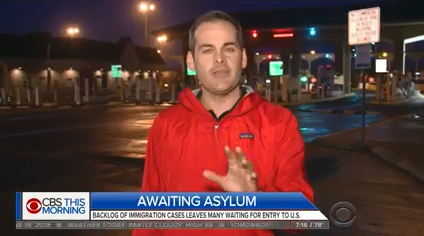 Lester Holt anchored Nightly News last night from Mission, Texas, at the U.S.-Mexico  border. He was the only network news anchor to do so.

“What is happening here is testing our better angels on multiple fronts, challenging our competing values of protecting our sovereignty and honoring our hearts.”@LesterHoltNBC closes @NBCNightlyNews with some final thoughts as he anchors from McAllen, Texas. pic.twitter.com/YHrI4j22aK

He, and Today show correspondent Craig Melvin, reported for Today this morning. Melvin reported from outside a Walmart in Brownsville, Texas, a building which had been turned into a detention facility housing roughly 1,500 boys,aged 10 to 17, who were all caught illegally crossing the border. It is America’s largest facility for such minors.

“@tedcruz has announced that he is going to be introducing emergency legislation to keep children with their parents during this process.” @craigmelvin has the latest on the forced separation of migrant families pic.twitter.com/5nivETAE0V

National TV news reporters including NBC News’s Jacob Soboroff and ABC News’s Tom Llamas are among those who have been reporting from the detention facilities since last week.