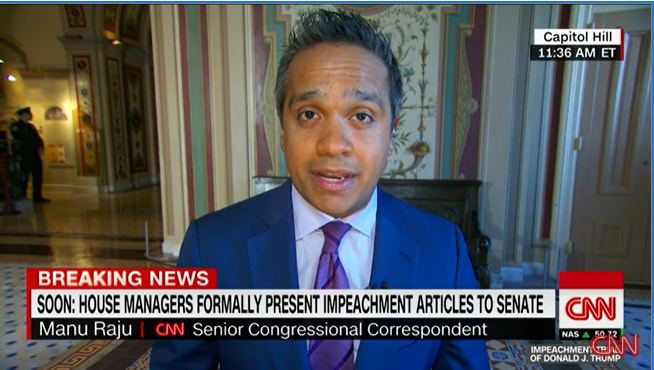 CNN senior congressional correspondent Manu Raju approached Arizona senator Martha McSally in the halls of congress earlier today, and asked what seemed to be a relatively simple question about whether the senator would consider new evidence in Pres. Trump’s impeachment trial.

He received an interesting answer.

“You’re a liberal hack. I’m not talking to you,” McSally said.

“You’re a liberal hack,” McSally repeated, before running into an office.

Raju’s colleagues stood up for him and condemned McSally’s behavior.

“He was just asking the question of the day!” Jake Tapper told Wolf Blitzer. “McSally just calls Manu Raju, respected widely on Capitol Hill by Democrats and Republicans, calls him a nasty name.”

“Oh my God,” Dana Bash could be heard remarking in the background.

Nia-Malika Henderson stated that Sen. McSally wants to attack the media because she’s “under the gun” and facing a tough re-election. John King was asked about how McSally doubled down on the name-calling by tweeting out her own version of the video, and he said its probably part of her strategy because “she can’t win without the Trump base. She can’t.”

“If she abandoned the Trump base and the president turns on her, she is done,” King said. “McSally could have had a very easy answer…Instead, she attacks, she made her decision, sticking with the president here.”

I’ve never see a senator treat a reporter like this. Manu Raju is one of the best Congressional reporters I’ve ever seen, including my years working in the Senate. I’ve never detected a hint of liberalism or partisanship from @mkraju https://t.co/SARp2pPPMt

And CNN PR later responded to the kerfuffle:

“It is extremely unbecoming for a U.S. Senator to sink to this level and treat a member of the press this way for simply doing his job.”

Later in the day, Jim Acosta asked for Pres. Trump’s response to Parnas’ claim, in interviews this week on MSNBC and CNN, that his efforts in Ukraine were all about Biden and the 2020 election.

“I don’t know him,” Trump said. “I don’t know Parnas other than, I guess, I had pictures taken with him which I do with thousands of people including people today that I didn’t meet.”

“I don’t know him at all, don’t know what he’s about. Don’t know where he comes from. Know nothing about him,” Trump added.

Trump continued to deny knowing Parnas, though he conceded to taking photos with the donor.

“Perhaps he’s a fine man, perhaps he’s not, I know nothing about him,” the president added.

As Acosta repeatedly sought to ask further questions on Parnas’ claims that he knew Trump, the president snapped: “Quiet.”