NEXT:John Roberts: 'It Is Incumbent on All of Us to Take the Time to Triple Check Our Sources, Pursue the Facts and Get the Story Right'
PREVIOUS:Megyn Kelly to Ashleigh Banfield: 'You Are One of the Reasons I Am Sitting Here' 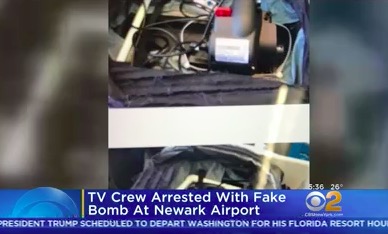 At least seven members of a TV crew were arrested Thursday after they tried to sneak fake explosives through security at Newark Airport.

NJ.com reports the crew is from Endemol Shine and was producing a show for CNBC.

The fake device was made up of a PVC pipe with wires coming out of it.

“We are looking into the details of what happened as a matter of priority and are in contact with relevant authorities on the ground,” said Julie Holland, a spokesperson for Endemol Shine North America. “While this process is ongoing we are unable to comment further, but in the meantime, we sincerely apologize for any disruption caused.”

CNBC has a robust schedule of prime time reality programming, some of which is produced in partnership with Endemol Shine. One of those shows, Staten Island Hustle, debuts this spring.