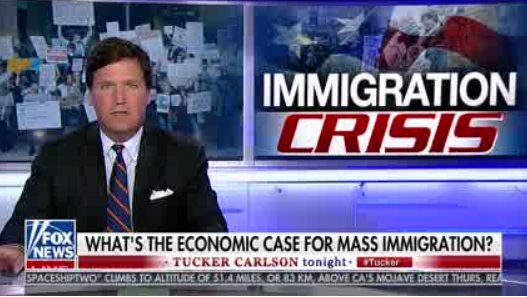 Newport Beach Ca.,-based insurance company Pacific Life has decided to suspend advertising on Tucker Carlson Tonight in response to remarks the host made on Thursday night’s broadcast that were highly critical of immigration.

On Thursday, a Pacific Life ad appeared moments after the host delivered an opening monologue on his 8 p.m. show, during which he said that immigration makes the United States “poorer and dirtier and more divided.”

People debate all the time about mass immigration. What you never hear anybody do is make the economic case for mass immigration. Here’s why: Our country’s economy is becoming more automated and tech centered by the day. It’s obvious we need more scientists and skilled engineers. That’s not what we’re getting. We’re getting people with waves of high school educations or necessary. Nice people. Nobody doubts that. But for economics, this is insane. Nobody tries to defend it. Instead, our leaders demand you shut up and accept this. We have moral obligation to admit the world’s poor even if it makes our own country more poorer and divided. Immigration is a form of atonement….

Pacific Life apparently felt this wasn’t a message it wanted its brand attached to.

“As a company, we strongly disagree with Mr. Carlson’s statements. Our customer base and our workforce reflect the diversity of our great nation, something we take great pride in. We will not be advertising on Mr. Carlson’s show in the coming week as we reevaluate our relationship with his program,” the insurance company noted in the statement below.

A message from Pacific Life: pic.twitter.com/bDq9hzia53

A Fox News spokesperson provided TVNewser with the following statement:

“It is a shame that left wing advocacy groups, under the guise of being supposed ‘media watchdogs’ weaponize social media against companies in an effort to stifle free speech. We continue to stand by and work with our advertisers through these unfortunate and unnecessary distractions.”

Yes, Pacific Life is just one of the many advertisers who buy time on Tucker Carlson Tonight, which is a top 3 cable news program and No. 1 in its time slot. But this development is something worth keeping an eye on.

It’s also not the first time Fox News hosts’ remarks have inspired advertisers to pull their commercials from FNC programming. One of the ad boycotts led to the demise of then-star host Bill O’Reilly, who exited FNC in April 2017.

In addition to O’Reilly in 2017, Laura Ingraham and Sean Hannity have also been the targets of ad boycotts as a result of making on-air remarks their vociferous detractors have deemed hateful.

Ingraham was off the air for 11 days back in late March-early April 2018 after getting in a spat with Parkland HS student and gun control activist David Hogg. (It’s worth noting, however, that Ingraham had a pre-scheduled vacation).

Brands pulled their advertising from Hannity in November 2017 in light of his interview with then-Alabama Senate candidate Roy Moore. (Remember the Keurig tossing incident?)