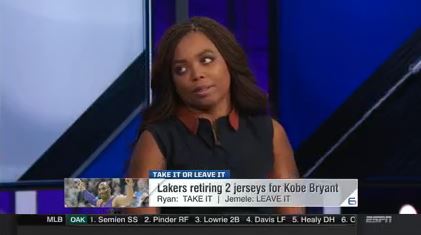 Just as ESPN was hoping the Jemele Hill controversy was subsiding, the president weighed in on it this morning.

“ESPN is paying a really big price for its politics (and bad programming),” he wrote on Twitter. “People are dumping it in RECORD numbers. Apologize for untruth!”

On Monday night, Hill, who anchors the 6 p.m. edition of ESPN’s SportsCenter unleashed a barrage of tweets calling Trump “a white supremicist,” “ignorant,” “unqualified,” and “a bigot.”

“He is not a leader. And if he were not white, he never would have been elected,” she concluded.

Then on Wednesday, White House press secretary Sarah Sanders was asked about the comments, calling them “a fireable offense by ESPN.”

So, to address the elephant in the room … #Facts pic.twitter.com/RTrIDD87ut

The president’s comment this morning hits at ESPN’s bottom line. In the last two years, ESPN has lost more than 7 percent of subscribers, now around 88 million. ESPN has also seen ratings losses and staffing cuts of late.