NEXT:Thursday, Sept. 3 Scoreboard: Fox News Is No. 1 Across the Board; MSNBC 2nd in Demo and Total Viewers
PREVIOUS:ABC Revives Turning Point for Monthlong Look at the Country’s Racial Reckoning 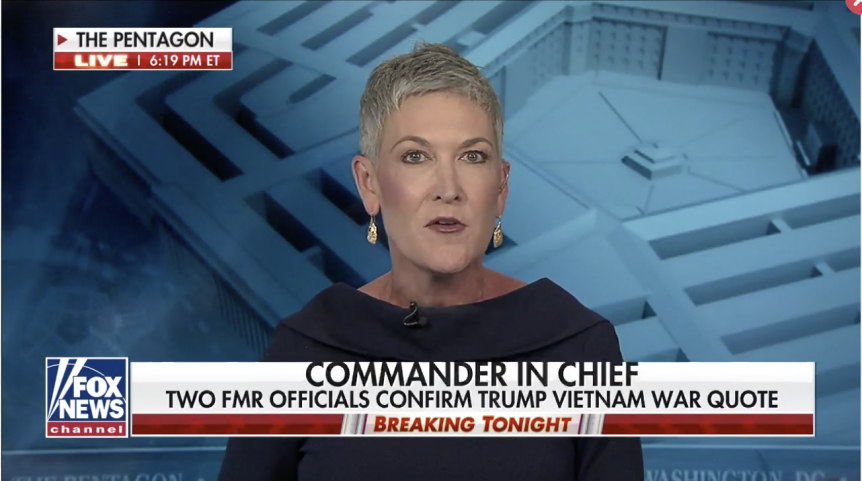 Friday night, President Trump called for Fox News national security correspondent Jennifer Griffin to be “fired” for confirming most of the reporting from The Atlantic editor-in-chief Jeffrey Goldberg’s explosive story on Thursday, which among other things alleged that Trump referred to U.S. service members who died in World War I as “losers” and “suckers.”

Several Fox News colleagues quickly tweeted in support of Griffin, while Griffin said on Fox News Saturday morning that “my sources are unimpeachable.”

Yesterday, Griffin was one of several reporters to confirm all or most of the reporting in Goldberg’s Atlantic story.

She appeared on Fox News to discuss her reporting during the 3 p.m. hour Friday, and returned to air around 6:30 p.m.

Trump made his displeasure known on Twitter Friday night, tweeting that the story was “refuted by many witnesses. Jennifer Griffin should be fired for this kind of reporting. Never even called us for comment. @FoxNews is gone!”

Jennifer Griffin of Fox News Did Not Confirm ‘Most Salacious‘ Part of Atlantic Story https://t.co/rUpbSWhHac via @BreitbartNews All refuted by many witnesses. Jennifer Griffin should be fired for this kind of reporting. Never even called us for comment. @FoxNews is gone!

Fox News has not released a statement in support of Griffin, following a longstanding, albeit unofficial, policy not to engage publicly with any of Trump’s tweets about the network or its talent. However, the network is supporting her internally, and Griffin appeared on Cavuto Live this morning to discuss her reporting and respond to Trump’s tweet.

“Deep Throat was an unnamed source. It didn’t make what he said untrue. My sources are not anonymous to me and I doubt they are anonymous to the president,” said Griffin, who added, “I can tell you that my sources are unimpeachable. I feel very confident with what we have reported at Fox.”

Neil Cavuto told her, “You are a very good reporter, and then some. Jennifer Griffin following the story here. She’s pretty scrupulous when it comes to making sure all the Is are dotted and all the Ts are crossed.”

Here is a sampling of what other newsers—from Fox and its rivals—have tweeted in support of Griffin.

Jennifer @JenGriffinFNC is a great reporter and a total class act. https://t.co/se0k6I2oLa

I’ll forever stand by @JenGriffinFNC. Very accomplished journalist and distinguished colleague, who is always very careful with reporting stories like this. Also stand by our fine polling unit, which the president has targeted numerous times. These attacks are unwarranted. https://t.co/OuoNiemrpF

Jennifer Griffin once helped to secure the release of her colleagues who were kidnapped in Gaza.

She reported from war zones for years and is now one of the most well connected journalists in DC.

She embodies what the industry is built upon. Truth and accountability. https://t.co/kcFF5BZhNJ

.@JenGriffinFNC and I have been friends for 30 years, across several continents. We have indeed argued when she would critically cover Obama Administration’s national security policies. She is a pro; she knows Pentagon; no agenda; @TheAtlantic story holds. This is just her.🇺🇸🇺🇸 https://t.co/32qXVbwJVQ

.@JenGriffinFNC is a total pro who knows the national security world better than anyone. https://t.co/bAmf3ONX3d

Why does Trump want Fox’s Jennifer Griffin fired when he repeatedly denounced cancel culture at the RNC?

By now, it should be obvious the attacks on @JenGriffinFNC — a world class journalist — are part of a pattern: If you dislike the message, try to utterly destroy the messenger.

The problem is that only works so many times. Once people are aware of the pattern, it’s just noise.