NEXT:Friday, May 8 Scoreboard: Tucker Carlson Ranked No. 1 on Cable News in Total Viewers and Adults 25-54
PREVIOUS:Saturday, May 9 Scoreboard: Greg Gutfeld Earned Most A25-54 Viewers, While Jeanine Pirro Captured Most Total Viewers in Prime Time 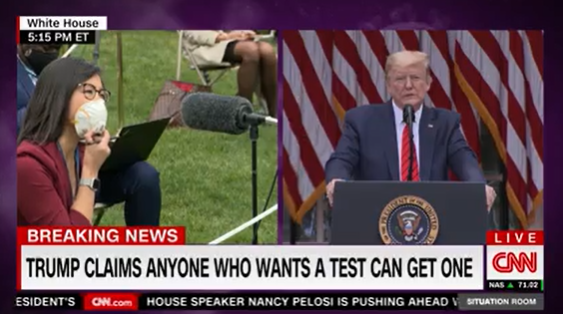 We’ve covered President Trump’s press conferences ad nauseum over the past three-plus years, but today’s was unique in how the president decided to end the event, abruptly doing so after awkward, rather heated exchanges with two different White House correspondents.

CBS News’ Weijia Jiang, who Trump criticized at around this time last month, asked the president about his touting of U.S. coronavirus testing numbers. “Why does that matter?” Jiang asked. “Why is this a global competition to you if every day Americans are still losing their lives and we’re still seeing more cases every day?”

“They’re losing their lives everywhere in world. And maybe that’s a question you should ask China. Don’t ask me. Ask China that question, OK?” Trump responded. “When you ask them that question, you may get a very unusual answer.”

Sort of an awkward thing to say, considering the question was being asked by a Chinese-American reporter.

After making the statement, Trump tried to move on, gesturing to another reporter and saying, “Yes, behind you, please.”

However, Jiang didn’t let up, asking, “Sir, why are you saying that to me, specifically, that I should ask China?”

“I’m not saying it specifically to anybody,” Trump said. “I’m saying it to anybody that would ask a nasty question like that.”

Then, CNN’s Kaitlan Collins, who Trump seems to criticize on a more consistent basis, tried to ask a question. Then, when it seemed like he was going to move on, Collins said, “You pointed to me. I have two questions, Mr. President.”

“You called on me,” Collins said.

“I did, and you didn’t respond, and now I’m calling on the young lady in the back,” Trump responded.

The young lady in the back was PBS NewsHour White House correspondent Yamiche Alcindor, who has had her fair share of issues with the president. According to Alcindor, she pointed at Collins to continue, and then Collins said she just wanted to let Jiang finish.

Why did Trump end WH briefing? @weijia asked Trump why he sees this as “a global competition” when 80K have died. He said: “Ask China.”

He tried to move on but wouldn’t let @kaitlancollins ask her Q.

He called on me but I motioned for Kaitlin to ask her Q so Trump walked off.

Before Collins could ask her question, the president abruptly ended what had been an already bizarre press briefing.