NEXT:Happy 65th Birthday to Face the Nation
PREVIOUS:For the Third Consecutive Year, Jake Tapper Is Joining Forces With Homes For Our Troops on Veterans Day 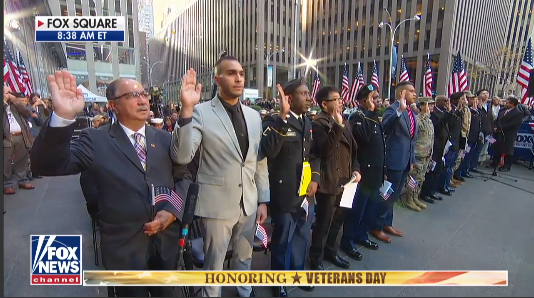 Here’s something you don’t see everyday on a national television news program. Or on television in general: A live naturalization ceremony.

Fox & Friends featured one during this morning’s Veteran’s Day broadcast, where 12 veterans, including a 92-year-old World War II veteran, were sworn in as United States citizens.

Pres. Trump’s acting director of the U.S. Citizenship and Immigration Services Ken Cuccinelli led the swearing in ceremony, which took place on “Fox Square” outside the News Corp. building on Avenue of the Americas in Manhattan.