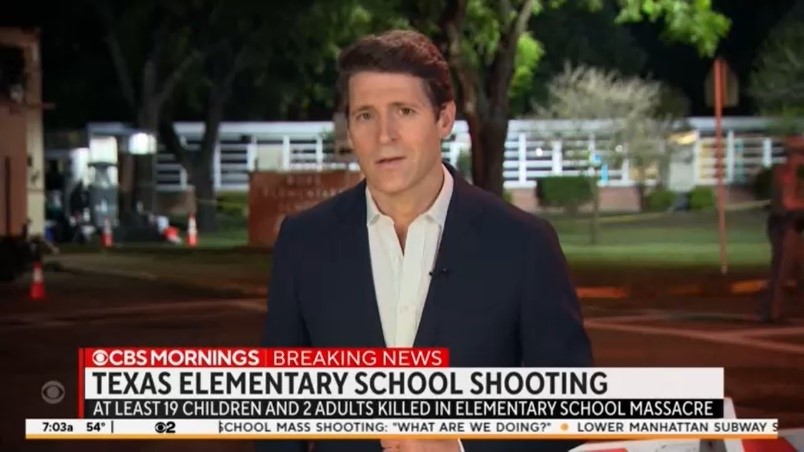 With Norah O’Donnell still recovering from Covid (something yours truly can relate to!), CBS anchor Tony Dokoupil will anchor CBS Mornings and the CBS Evening News Wednesday from Uvalde.

Shepard Smith will be live from Uvalde Wednesday for his evening newscast on CNBC, which will air from 6-8 p.m. ET (versus his usual 7-8 p.m. ET). Correspondents Valerie Castro and Perry Russom will also be on site in Texas to cover the story for The News with Shepard Smith.

For Fox News, Bill Melugin is live on the ground outside Robb Elementary in Uvalde. FNC correspondent Jeff Paul and Cross Country host Lawrence Jones are also on site in the south Texas town.

For Telemundo, evening news anchor Julio Vaqueiro will be broadcasting live Wednesday from Uvalde during a special one-hour evening newscast. Nacho Lozano, an anchor on the network’s morning show, hoyDia, was reporting live from Uvalde this morning. Noticias Telemundo also has three correspondents (Edgar Munoz, Francisco Cuevas and Damia Bonmati), as well as correspondents from Telemundo local stations on the ground.

Elsewhere, Marlene Guzman, Francisco Cobos, and Nidia Cavazos are on the ground covering the story for Univision.