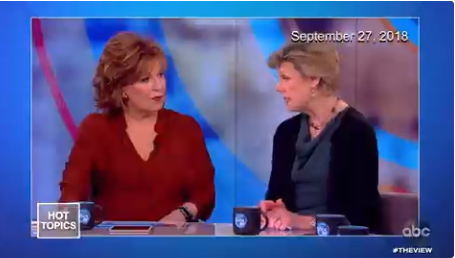 The women of The View remembered their former ABC News colleague Cokie Roberts during this morning’s broadcast. Roberts passed away due to complications from breast cancer this morning at the age of 75.

“Right before we went on air, we learned the sad news that we lost an amazing giant in the world of journalism and a great woman – her name is Cokie Roberts,” said Whoopi Goldberg, a statement which draw audible gasps from the studio audience. “Her influence and impact cannot be overstated. She’s one of those women who you know her face and you know when she’s talking – you need to pay attention to what she’s saying. It doesn’t matter where you are on the spectrum. When she spoke, people listened.”

Joy Behar added: “She was always reliable and smart and to the point, and she had a great sense of humor. She had an easygoing way about her.”

Abby Huntsman: “She really was the gold standard, and a woman that I looked up to so much, not just because of her role on television, but as a woman.”

Sunny Hostin: “When I came back to ABC News, she was one of the people who reached out to me, and it was so wonderful. I remember during the [Brett] Kavanaugh hearings, I was covering it with her and we were sitting around the table, and I was very nervous to be seated with her. She reached over and she grabbed my hand. I realized I was going to be OK.”

Meghan McCain: “I remember her with Sam Donaldson hosting This Week in my house; we watched all the Sunday news shows. One of the things I loved about her was she wasn’t precious and she wasn’t sweet. She asked really hard-hitting questions in times when women really weren’t doing that.”