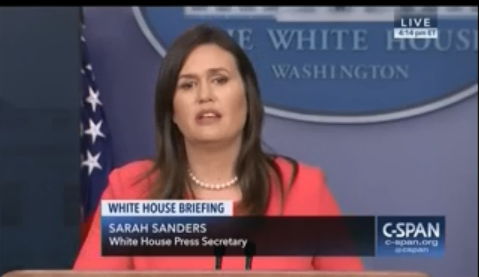 Fox News, C-SPAN, and CBSN took the briefing. CNN and MSNBC did not.

Bolton and Mcuchin stepped up to the podium and announced America’s decision to place sanctions on PDVSA.

“Today… we’re going to announce sanctions” on Venezuela’s “state owned oil monopoly,” said Bolton, speaking of PDVSA (Petroleums of Venezuela). He said that $7 billion in assets will be blocked, beginning today, and later commented “the president has made it clear that all options are on the table” when asked if the U.S. considering using military force in the South American nation.

U.S. treasury secretary Mnuchin spoke about the sanctions being placed on PDVSA, calling for President Nicolas Maduro to step down and for the immediate transfer of control of oil assets to the new, Democratically-elected Venezuelan government.

“The state of the economy, to me and to my colleagues is strong,” he remarked.

Kudlow disputed the most recent CBO report that found the shutdown cost U.S. economy billions, claiming there is not a macroeconomic effect on the U.S. economy; but he said he is concerned about the hardships suffered by furloughed employees.

Here are some of the questions that were asked of Sanders: