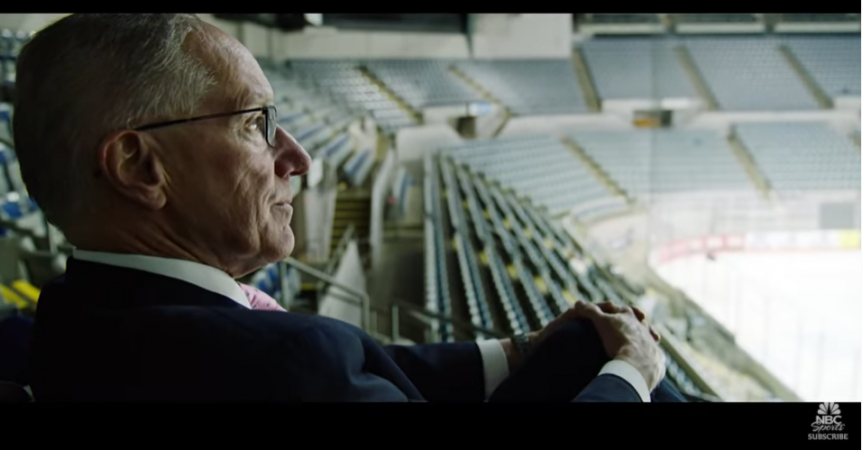 The voice of hockey in the U.S., and one of the most celebrated sportscasters in TV history, Emrick rose from calling college and minor league hockey in the 1970s to voicing the most important hockey games of the past three decades, including 22 Stanley Cup Finals, 45 Stanley Cup Playoffs/Final Game 7s, six Olympics, NHL Winter Classics and All-Star Games.

In all, Emrick estimates he has called more than 3,750 professional and Olympic hockey games.

In 2011, Emrick became the first broadcaster ever inducted into the U.S. Hockey Hall of Fame. In all, he’s a member of seven Halls of Fame. That same year, Emrick won the first of his eight career Sports Emmy® Awards for Outstanding Sports Personality—Play-by-Play, which is the most ever in the category, including an unprecedented run of seven consecutive in the years 2014-2020.

“It was 50 years ago this fall, with pen and pad in hand at old Civic Arena in Pittsburgh, I got my first chance to cover the National Hockey League. Gordie Howe was a Red Wing, Bobby Hull was a Blackhawk, Bobby Orr was a Bruin,” Emrick said in a statement. “A time like this makes me recall that we have seen a lot together. The biggest crowd ever, 105,000 at Michigan Stadium. A gold medal game that required overtime between the two North American powers in Vancouver.

“Things change over 50 years, but much of what I love is unchanged from then to now and into the years ahead. I still get chills seeing the Stanley Cup. I especially love when the horn sounds, and one team has won and another team hasn’t, all hostility can dissolve into the timeless great display of sportsmanship—the handshake line. I leave you with sincere thanks.”

“Mike ‘Doc’ Emrick is a national treasure—simply put, he’s one of the best ever to put on a headset in the history of sports broadcasting,” said NBC and CBSN executive producer and president, production Sam Flood. “Doc’s love of the game and his unmatched style produced true artistry, engaged new fans and quickly became the soundtrack of hockey. He lived at the rink on game days, spending countless hours at morning skates to find one more story to seamlessly weave into his frenetic, yet lyrical, call of a game. Doc always found the right words to meet the moment. It’s impossible to put into words the impact Doc has had not only on the game of hockey, but for anyone who has had the distinct pleasure to work with him.”

NBC Sports’ lead NHL analyst Eddie Olczyk, who shared the broadcast booth with Emrick the past 14 seasons on NBC, said: “It has been a privilege and education on hockey’s biggest stage to have sat next to Doc for the last 14 years. I will miss his stories, his preparation, his play-by-play, his friendship and our dinners on the road. But most of all, I will miss his trust. My family and I wish him, Joyce, the pups and horses lots of love down the road.”

Emrick was the television voice of the New Jersey Devils for 18 seasons (21 overall) on MSG Network before joining NBC Sports full-time in 2011.

Emrick’s career started during the 1970-71 NHL season, when he covered the Pittsburgh Penguins as a freelance reporter for the Beaver County Times. Emrick is affectionately known as “Doc” because he received his Ph.D. in broadcast communications from Bowling Green State University in 1976.

The 💫 GOLD 💫 standard! In the booth and as a friend. Doc, to have shared the airwaves with you has been a true blessing on my career. Congratulations on retirement from your legendary HALL of FAME broadcasting career. You’ll be missed. We❤️ YOU! 🏒 #ThankYouDoc @nhlonnbcsports pic.twitter.com/1XcUULhPz0