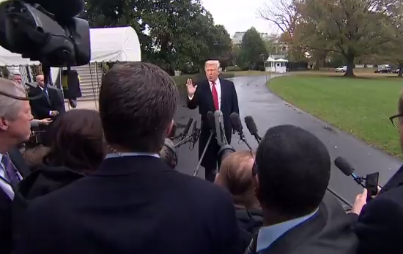 Launching a global TV news network is something President Trump has undoubtedly advocated for in private, but not in public. That changed this afternoon.

The commander-in-chief took to Twitter on Monday to bash CNN International, saying its coverage portrayed the United States “in an unfair and false way.”

While CNN doesn’t do great in the United States based on ratings, outside of the U.S. they have very little competition. Throughout the world, CNN has a powerful voice portraying the United States in an unfair….

….and false way. Something has to be done, including the possibility of the United States starting our own Worldwide Network to show the World the way we really are, GREAT!

With the second tweet, the president appears to be advocating for a state-run TV network.

Trump broaches the idea of starting state television because of his unhappiness with CNN.

This will upset current state TV management over at @FoxNews https://t.co/K0Y1TzvOHI

Who’s going to tell him about @VOANews https://t.co/CrMfw5BBQp

A former reality TV star and avid TV news viewer, many thought Trump might launch his own news network if he went on to lose the 2016 election.

“Trump will get 40 percent of the vote, and half that number at least will buy into his claim that the election was rigged and stolen from him,” Schmidt told Bloomberg for the Oct. 2016 story. “That is more than enough people to support a multibillion-dollar media business and a powerful presence in American politics.”

“I’ve seen a little bit of what they’re doing,” said CNN’s Jeff Zucker about Trump TV. “The beauty of the internet is that anybody can be a broadcaster now. I think the future of that depends on the next 13 days.”

Trump, of course, did not lose the election, but he briefly tried launching a news service anyway in the summer of 2017.

With former CNN political commentator Kayleigh McEnany on board as host, Trump TV was a short-lived digital news service which consisted of short, hosted clips which touted his accomplishments.

Prior to that, the Trump team launched a nightly show on Facebook Live during the final days leading up to the 2016 election, Trump Tower Live.

We’ll see if the president gets his wish for a global TV network while in office, or if this pronouncement was made purely to rile up media, political reporters and an assortment of critics.