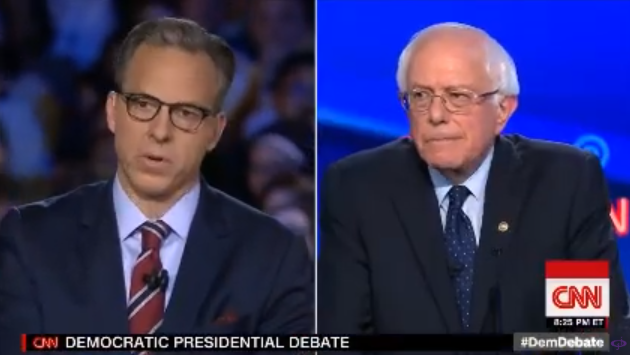 CNN hosts its first primary debate of the 2020 election cycle, and the reviews for night No. 1 are in.

On the production side, everything went relatively well. For instance, there were no live audio issues like what transpired during the NBC debate.

However, the debate format had its critics. Some journalists, pundits (and even candidates) complained on social media that the first half hour of the broadcast was too over the top for a serious political event.

I’m sitting in a hotel room with my team. It feels like we are about to watch the most boring football game in history.

So can we all agree that high-energy CNN movie trailer that opened the debate was a bit misleading?

Then there was the cutting off of the candidates answers.

I know the CNN moderators are well intentioned and trying to keep things on track but the interruptions are sucking a lot of the protein out of this debate.

Bernie Sanders‘ team, which consistently says how much it loathes these televised debates, expressed its displeasure again last night.

“Trump breaths air. You breathe air Bernie. How will voters tell the difference?”

Is this a Fox News debate? These right wing questions my god.

I shouldn’t be surprised. As we discuss on our latest episode of #HearTheBern, many perceived-to-be-liberal stations have more right wing panels than fox. Listen here: https://t.co/h2ZBCErs9i #demdebate

Sen. Sanders himself called out Tapper for using what he called a “Republican talking point.”

However, others argued that the moderators, Tapper, Dana Bash and Don Lemon did an admirable job of keeping the 10-candidate debate on track.

Fox News media critic Howard Kurtz referred to the debate as “substantive and even wonky.” He complimented Tapper and Bash, but referred to Lemon as “a liberal opinion host on the panel,” who was asking questions “blatantly from the left.”

The folks over at Five-Thirty-Eight were largely positive about the debate as well, also throwing out the term “substantive” to describe it.

After the debate, THR’s Jeremy Barr managed to track down multiple participants to get their thoughts on how the debate went. The candidates with whom he spoke largely gave the network positive reviews.

CNN Washington bureau chief Sam Feist told Barr he was quite pleased with how the debate turned out, pointing to the 30+-minute discussion on healthcare, in particular.

“We thought the debate worked very well,” Feist told THR. “We wanted to go and do a deep dive on a few very important subjects. We spent over a half hour just on health care. Everyone weighed in multiple times. Democrats say that’s the No. 1 issue for them, so that’s an example of how we just let it go because we thought that it was more important to do a deep dive on a subject like health care rather than hit 40 different issues.”

Feist continued: “So, if you watched this debate, I think that was one of the things that we tried to do, to go longer on fewer subjects. That was our goal, and I think we pulled that off.”