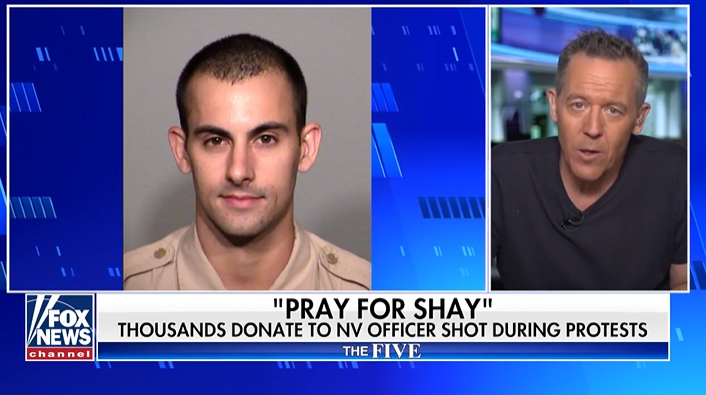 This week, the hosts of The Five have used their significant platform to raise funds to help pay the medical bills for Las Vegas Metro Police Department officer Shay Mikalonis, who was shot in the head on Monday, June 1 during protests in front of the Circus Circus resort in Las Vegas. Mikalonis, 29, is currently in the ICU at UMC hospital fighting for his life.

The Go Fund Me, now named the Shay Mikalonis Fund, was initially set up by a man named Michael Hawk, a retired Las Vegas Metro Police Department officer and a friend of Mikalonis’ father.

On Tuesday, the hosts discussed Mikalonis and the fund. The discussion starts at the 1:36 mark.

As of publication time, the Shay Mikalonis Fund has achieved $656,295 of the $750,000 goal, with 13,100 donors chipping in. All funds are set to be transferred to the IPOF (Injured Police Officers Fund) that has been set up at two Las Vegas banks, Wells Fargo and Nevada State Bank. The IPOF will then distribute those funds directly to the family. The IPOF has assured us that Mikalonis will receive 100% of all monies donated.

As of June 13, Mikalonis remains on a ventilator. He’s paralyzed from the neck down and unable to speak, the family said. However, he is awake and appears to recognize his family members.

TVNewser offers its best wishes to the policeman and his loved ones.