NEXT:Fox Business Is in the Midst of a Significant Brand Refresh
PREVIOUS:Scoreboard: Friday, Sept. 27 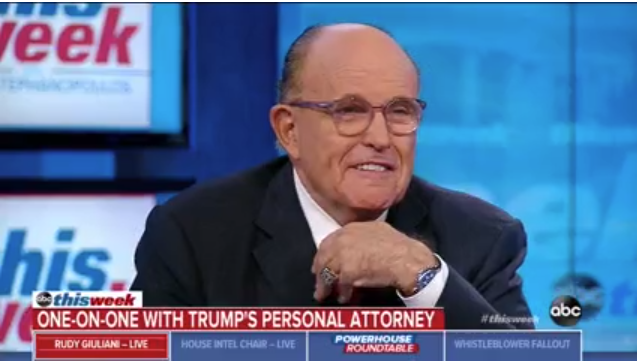 First reported by the Daily Beast, the Joe Biden presidential campaign appears to be fed up with TV news outlets giving President Trump’s personal lawyer Rudy Giuliani a platform to make uncorroborated statements regarding the business dealings of the former vp’s son Hunter Biden, and sent a letter to news execs and anchors at the major networks over the weekend, stating they should stop booking the former New York mayor.

Not sure if we’ve ever seen anything like this– a presidential campaign asking television outlets to ban a figure from a rival campaign from appearing on their airwaves. But then again, we’re living in extra-ordinary times.

Politico’s Michael Calderone obtained a copy of the Biden campaign’s letter to TV newsers, and also reported that it went out to the powers that be at ABC, NBC, CBS, MSNBC, CNN, and Fox News.

Giuliani appeared on a number of Sunday shows yesterday, including CBS’ Face the Nation and ABC’s This Week (as seen above), as well as Fox News’ Sunday Morning Futures.

According to a source from the Biden campaign, ABC and CBS’ Sunday shows were offered a high-profile Biden campaign surrogate to respond to Giuliani, but both networks declined.

What the Biden campaign seems, in essence, to be saying is if the shows are going to continue to book Giuliani, the least they can do is give their campaign the opportunity to respond.

Giuliani, in a text message to the Daily Beast, dismissed the Biden campaign letter as “the usual left wing censorship.”