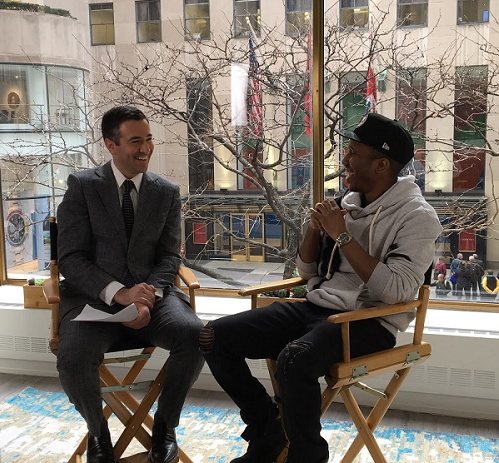 Ari Melber isn’t just MSNBC’s chief legal correspondent, and host of the network’s 6 p.m. show, The Beat with Ari Melber. The cable news vet is also the host of a digital video series for NBCNews.com called Mavericks with Ari Melber. A collaboration between MSNBC and NBC News Think (the commentary and opinion vertical for NBCNews.com), Mavericks was born out of Melber’s popular #FallBackFriday segments on The Beat, and from his frequent pop culture and hip hop references on the program.

We asked the MSNBC newser about the digital series –where he interviews celebrities and tastemakers doing extraordinary things– and the state of his MSNBC program, which analyzes the intersection of law, politics and culture in an era where the fields are arguably as intertwined as they’ve ever been.

TVNewser: Talk about the production process for Mavericks, from idea generation to execution.

Melber: We wanted to have a series of more in-depth conversations that weren’t limited by television and commercial breaks, but hopefully at TV quality. Mavericks allows us to go to people and have them in that longer conversation – and also on the show, if that works out, as it did with SNL’s Chris Redd. We hope the series is a way to really engage people across culture and policy regardless of what might be in the news that night and we hope people will watch some of these conversations long after we record them.

What has the response to the series been like so far, both internally and externally?

One thing I’ve seen is people say: “Great, I’d love to see more like this.” I think while there’s tremendous interest in the news, people are aware that the news in Washington crowds out other conversations and stories that used to make air. We all have that hunch, even if you’re not a news junkie. So, when we had Chloe [Grace Moretz] on talking about a movie challenging gay conversion therapy, that’s a conversation that frankly might not be the lead story in the news that night. But it’s still important. The new episode we have coming up this week, with Jill Soloway, creator of Transparent, is exploring gender and queer identity and how she made her show and where she thinks feminism is heading next, all of which we did in 20 minute conversation, which is different than say, the C block.

Let’s talk about the state of your MSNBC show. What do you like about it right now, and what do you want to do a better job of as you continue to grow in the role?

More people have a sense of the kind of political and cultural reporting that we are doing. We see that in a growing audience at 6 p.m. We see that online and in different types of audiences, some of whom say they don’t watch the show live. Some of the guests who I think we’ve been able to have come in and have really great conversations, not only about what they’re doing, but also across different worlds: Having Big Daddy Kane and Eleanor Clift on together, or Vic Mensa with Bobbito Garcia and Bill Kristol, or Ralph Nader with Stretch Armstrong. All of those are different pairings that we think yield a broader conversation, and we’re happily getting some of those people to come on the show. In terms of improvement – I still want to get more people from across politics and the administration on the show, because I think we’re living in a world where there’s a lot of talking about our political challenges, but not talking directly to people. We have worked very hard to get actual Trump officials and aides on the program, and not just everyone else talking about Trump. I think we want to continue to have that door open and continue to be a place where everyone understands they can come have a civil, fact-based dialogue.

Is there someone in particular you want on the program?

Well, the president is obviously invited and I think he is invited on most shows. A dream guest right now would be [former White House counsel] Don McGahn, who played such a deep and interesting role in so many of these issues. Another couple dream guests in a different dimension would be to get Warren Buffett and Jay-Z on together to talk about capitalism and economic opportunity across the country. I’d love to get Chief Justice John Roberts, or Brett Kavanaugh. There are a lot of people who are interesting to hear from, even if some can’t answer every question because of the job that they do.

Ratings for your show have been pretty strong since launch in summer 2017. Are ratings something you pay attention to? You go up against formidable competition in Bret Baier and Wolf Blitzer, not to mention the evening newscasts.

I don’t look at ratings when they come out in the afternoon before the show because I’m focused on that day’s show, but I do see the overall numbers. As you say, we are up against some real famous, well-known journalists on CNN and Fox at 6 p.m. It’s definitely gratifying to see some audience growth against them. But we’re going to do this show this way regardless of ratings, and I think that shows in the decisions. Whether it’s sitting down with people like Corey Lewandowski and Steve Bannon, who may or may not drive ratings, or putting Ralph Nader with Stretch Armstrong, we don’t care about whether or not that’s going to rate. I bet if we did, we might have second thoughts! (laughter) But we’re doing those things because we think they’re interesting and we want to add to what’s out there, not just duplicate or echo what’s out there.

You previously co-hosted The Cycle  and occassionally subbed in for the network’s prime time hosts before getting your own show. Who gave you the best advice as you took on this new role?

I talked to a lot of the leading anchors here, as well as executives. Like any good lawyer, I’m going to maintain a confidentiality of advice offered in confidence. I will say someone who knows a lot about news and law is my old boss and mentor Floyd Abrams. He gave good advice about making sure you know what your journalistic lines are because sooner or later they’ll be tested, and you have to know your lines before you’re in a hot decision, or a day-of decision. So he talked a lot about standards. I also got advice from someone who I’ll leave as an unnamed person who said that the biggest mistake you can make in this business is trying to pander with your perception of the audience and always trying to get them to agree with you; Because even if you know what the audience thinks, and you won’t always, what’s far more important is trying to show how you come to your reporting, and why you deserve their trust. If you can get there, then it won’t matter as much if there’s disagreement because you try to prove to people why you’re worth listening to, even or especially when you might disagree.