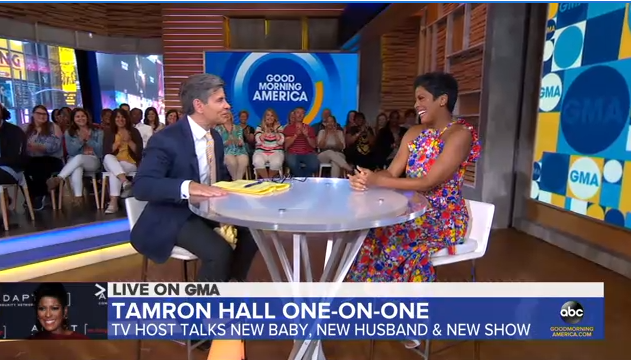 Tamron Hall stopped by GMA this morning to promote her new daytime talk show that will premiere Sept. 9 on Disney | ABC-Owned Stations across the country.

She sat down with George Stephanopoulos in studio to talk about the new program, motherhood, and her February 2017 exit from NBC News.

On the new show: “This is my first time on live television in two and a half years,” Hall told Stephanopoulos. “When I left my last job, there was a photo of me leaving, walking across Fifth Avenue; and when I look at that picture, I realize I was just in a fog. I didn’t know what was next…I just knew everything I was comfortable with was gone.”

She added: “I ended up just losing it all. You’ve answered the calls, you go in, and suddenly you’re not the person they want.”

In response to reports at the time that Hall was angry Today’s Take had been replaced by Megyn Kelly, NBC News president Noah Oppenheim told The Hollywood Reporter in April 2017:

We made her an offer that I think reflected our strong desire that she be part of our family moving forward, that would have given her a very prominent and substantive role here at the network. We were obviously disappointed that she chose to pursue her future elsewhere, and we wish her only the best.

In the interim, she has continued to host Deadline Crime on Investigation Discovery. However, live television is her passion.

For Hall, it’s about getting back up off the mat, and she says she has done exactly that.

She recalled watching Rocky back when she was in second grade and having an emotional reaction to seeing the lead character get beat up. The lesson she took away from the experience was “believing that I’m on the mat but not having to stay there; and we want people on the show to talk about that.”