He anchors two newscasts that rank No. 1 in their respective genres among adults 25-54, and now NBC News’ Lester Holt has another honor: The most-trusted news host in America.

At least that’s what respondents to a survey from Morning Consult and The Hollywood Reporter say.

“Trust is at the heart of what we do,” Holt told THR. “The recent sustained attacks on the truth remind us how precious that is. To me, there is no higher honor than to have earned that trust.” 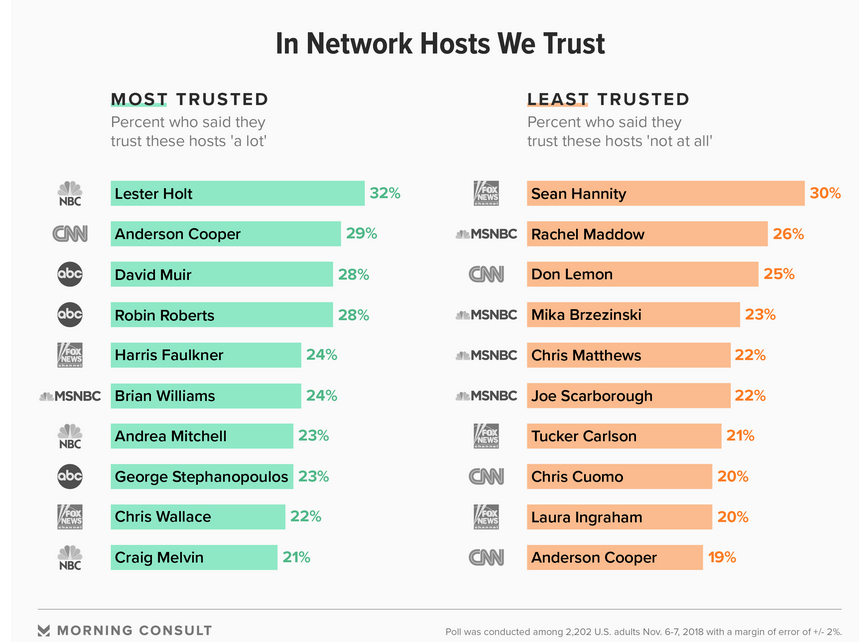 In fact, among adults aged 25-49, Roberts is most-loved news host, with 53 percent holding a favorable view of her, while 14 percent have an unfavorable view.

In total, four of the top 10 are African American. NBC News’ Craig Melvin is No. 10.

Three of the top 10 “most-trusted” are from NBC. ABC has three as well. Fox News has two, including Chris Wallace. CNN and MSNBC each have one. Add Brian Williams into the mix, and NBC News technically leads the way with four TV newsers in this top 10 “most-trusted.”

When roughly one in three TV news consumers trust your reporting, which appears to be the case for Holt, that’s seems pretty good in this day and age.

In contrast, Democrats’ favorite TV newsers are from ABC, CNN and NBC.

And then, there are the “least-trusted,” which seem to be mostly opinion hosts.

The first and second-ranked personalities on this list also happen to host the two highest-rated programs on cable news…which means that someone likes them. It also means Democrats don’t trust Sean Hannity at all, while Rachel Maddow isn’t trusted by Republicans. No real surprise there.

But if you ask these TV newsers, they’ll tell you that they didn’t get into the business to be liked. At least that’s what Holt says:

“We all like to be liked, and it’s important that people feel comfortable with the person presenting the news,” Holt told THR. “If I could have likability and trust too, I’d be awfully happy. But I didn’t get into this business to be liked. I got into it to tell stories, to open eyes, and hold those in power accountable.”