NEXT:Court TV Is Returning in May, and Will Reach More Than Half of U.S. TV Households at Launch
PREVIOUS:Scoreboard: Friday, Dec. 7 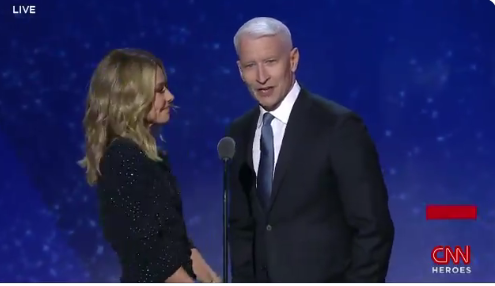 The 12th annual CNN Heroes: An All Star Tribute ceremony aired live last night on CNN, and was co-hosted for the third consecutive year by CNN’s Anderson Cooper and ABC’s Kelly Ripa…and Will Ferrell (see below).

The annual ceremony honors everyday individuals who have made extraordinary contributions to help improve the lives of others, and it was held at the American Museum of Natural History in New York.

“This show is better than therapy…just ask my therapist!” quipped Ripa.

Join Anderson Cooper and Kelly Ripa as they announce the CNN 2018 Hero of the Year. #CNNHeroes starts now on CNN https://t.co/XbCa1nrSZS pic.twitter.com/ADfCPchE5K

Additionally, Sully, former President George H.W. Bush‘s service dog, was part of the festivities as the network honored an incredible cast of everyday heroes for the 12th consecutive year.

Dr. Ricardo Pun-Chong, a physician from Lima, Peru was named CNN’s 2018 Hero of the Year for his efforts to provide free housing, meals and support for sick children and their families while they undergo treatment.

Pun-Chong was selected by online voters, and received an additional $100,000. He remarked on stage that he’ll be able to triple his efforts thanks to the gift.

“The real heroes are our kids,” says Dr. Ricardo Pun-Chong, whose nonprofit Inspira provides free housing, meals and support to ill children and their families in Peru. #CNNHeroes https://t.co/XbCa1nrSZS pic.twitter.com/RpTGbSQ8Gl

For the 11th consecutive year, Subaru was a major brand partner for the event. The company is matching donations to all of 2018’s Top 10 Heroes (named below) up to $50,000 per hero. Other major CNN Heroes brand partners for 2018 included Geico, Humana, Novartis and Servpro.

Abisoye Ajayi-Akinfolarin, a computer programmer in Lagos, Nigeria, teaches impoverished women in the city’s slums how to code through a program run by the Pearls Africa Foundation.

Maria Rose Belding launched MEANS, a platform that reduces food waste by connecting restaurants and businesses with extra food to charities that feed the hungry.

After she was paralyzed in a ski accident, Amanda Boxtel started Bridging Bionics — a nonprofit that provides high-tech physical therapy to people with mobility impairments near Aspen, Colorado.

Dr. Rob Gore, an emergency physician in Brooklyn, New York, founded the Kings Against Violence Initiative, which leads anti-violence programs in his community.

Luke Mickelson quit his high-paying job to found Sleep in Heavenly Peace, a nonprofit that builds and delivers beds to children in need.

Ellen Stackable is a former English teacher who founded Poetic Justice, a nonprofit that teaches creative writing to incarcerated women in Oklahoma.