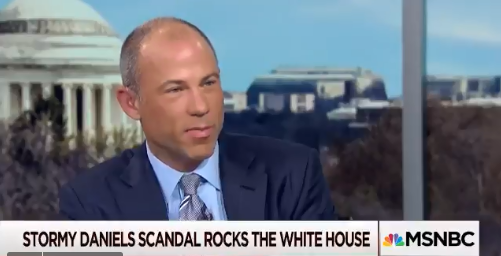 Stormy Daniels’s attorney Michael Avenatti has been making headlines on television news lately. He told Anderson Cooper last night on AC 360 that this legal fight with Pres. Trump’s team, “is like Christmas and Hanukkah all rolled into one…perhaps the greatest gift that I’ve ever received.” His highly-anticipated 60 Minutes interview with Cooper and his client Daniels will air on the newsmagazine Sunday, March 25.

Avenatti went on Morning Joe roughly 12 hours later to tease the upcoming 60 Minutes interview, and told the panel that his client has been threatened with physical harm to stay silent about an alleged affair in 2006 with Pres. Trump. But he wouldn’t say exactly who threatened her.

Here’s the back-and-forth from this morning, which took place after the hosts had seemingly wrapped up the interview and thanked Avenatti for coming on the program:

Mika Brzezinski: “Was she threatened in any way?”

Brzezinski: “Was her life threatened?”

Avennati: “Again, I’m not going to answer that. People will have to tune into 60 Minutes on March 25th.”

Scarborough then quipped, “So now you’re working for [CBS chairman] Les Moonves.” Which elicited a few uneasy laughs from Avenatti and the panel, which also included Willie Geist and John Heilemann.

Then the questions continued:

Avenatti: “Again, I’m not going to answer that.”

Scarborough: “Will you deny that the president of the United States threatened your client?”

Avenatti: “I will not confirm or deny.”

Geist: “Will you confirm or deny that in the 60 Minutes interview?”

Friday afternoon, White House Press Secretary Sarah Sanders was asked if she’d talked to the president about the claim: “We take the safety and security of any person seriously… but I have no knowledge of that situation,” Sanders said.

Sarah Sanders on Stormy Daniels’ claim that she was physically threatened to stay silent about her alleged affair with Trump: “We take the safety and security of any person seriously … but I have no knowledge of that situation” https://t.co/TuQQlGuJEz https://t.co/XUqM6lKk53